Prop. 123 too close to call; slight ‘yes’ lead
Yavapai voters lean toward ‘no’ 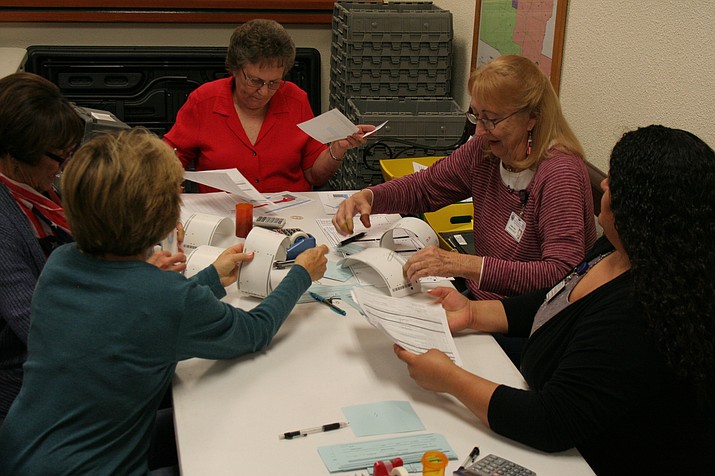 PRESCOTT – Arizonans narrowly favored Proposition 123 in preliminary returns Tuesday night, May 17, but with a margin of less than 1 percent statewide, the results are too close to call.

Yavapai County voters came down against the measure, with over 2,100 more votes in the “no” column, a difference of more than 4 percent as of 11:15 p.m.

The bigger differences are in the state’s two most populated counties.

If a narrow victory holds through the final count, schools statewide stand to receive $3.5 billion over the next decade, while Gov. Doug Ducey, the measure’s prime architect, along with legislators can continue to keep a promise not to raise taxes.

Passage would also mean the end to a protracted legal challenge schools brought against the state over voter-approved inflation funding.

“We never thought this was going to be a slam dunk,” Ducey said Tuesday night.

Rather than wait for a November ballot, with a presidential election and higher voter turnout, the governor insisted on a May election so the new funds could make their way into schools’ 2016-17 budget.

In Humboldt Unified School District, the measure’s passage is the difference of about $1.2 million, with about $1 million slated for staff salary increases.

For Prescott Unified School District, the estimated $700,000 tied to the measure will save district jobs and prevent the district from having to increase class sizes.

“This is fixing a legal mandate, but it’s time to make education a priority,” he said.

Howard said that’s the message he and 10 other superintendents brought to the governor’s office in May, just days before the legislature passed a budget that didn’t cut education.

“We said we’ve got to know what’s happening next. This is not enough,” Howard said.

The purpose behind Proposition 123 was to end a lawsuit filed in 2010 after lawmakers and then-Gov. Jan Brewer, in a budget-balancing maneuver, ignored a 2000 voter-approved mandate to boost state aid to schools annually to account for inflation.

The state Supreme Court agreed, but the justices did not decide how much the schools are owed. Rather, the trial judge ordered the state to increase K-12 funding by $330 million a year.

But lawmakers haven’t followed through, and the case is currently in the Court of Appeals.

If Proposition 123 passes, schools have agreed to drop the lawsuit.

Proposition 123 is the final piece of a multi-part deal. And not everyone was convinced it was a good deal.

A separate question not yet litigated, tied to inflationary increases is still undecided, in which schools stand to receive more than $1 billion.

But education groups said they would rather take the smaller amount now than wait for a court to decide.

“After four years of litigation that produced no money to schools, and knowing that the legislature is the body that according to the constitution that appropriates funds, it made sense to secure this immediate funding relief,” said Andrew Morrill, president of the Arizona Education Association.

Morrill said that there was no guarantee – and no court precedent – to guarantee the missed aid would be restored.

He also said the deal ensures lawmakers will fund inflation increases into the future, with additional dollars going directly to schools, without strings.

Howard said he’s eager to see specifics from the governor’s office and Legislature to make good on a promise for more.

“Living and dying by the polls is not the way to educate kids,” Howard said. “When our ability to educate kids doesn’t come down to an election, then we’ve begun to move the needle.”

Late Tuesday night, Dan Scarpinato, the governor’s press aide, told media in Phoenix: “Results and availability (of the governor are) not going to happen tonight. Some counties have stopped counting any more ballots tonight.”

The Secretary of State’s office notified media by email that counties were suspending counting for the night, as early as 9:30.

Update: On Wednesday morning, statewide totals still showed a margin of less than 1 percent, with the “yes” vote leading by 8,806 votes, out of more than 921,000 ballots counted. In Yavapai County, the vote against Proposition 123 grew to a margin of 2,543, or about 5 percent of 50,162 ballots counted.

Howard Fischer of Capitol Media Services contributed to this story.