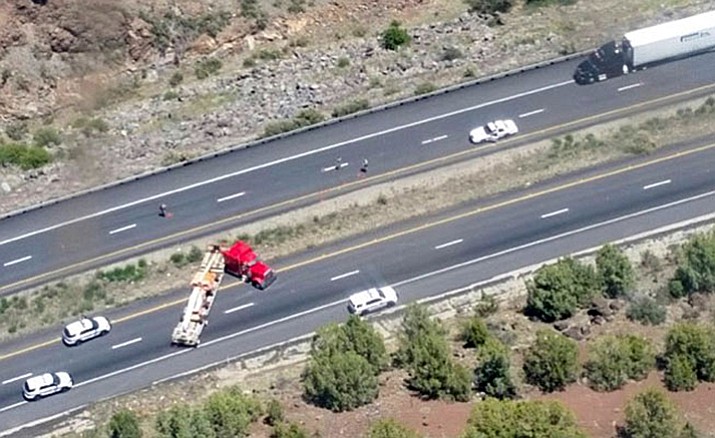 A tractor-trailer rig blocks Interstate 40 lanes Sunday afternoon, May 15, after its driver took DPS troopers on a 100-mile chase from the Kingman area to near Ash Fork.

Interstate 40 near Ash Fork was closed in both directions Sunday afternoon after a tractor-trailer rig led police on a 100-mile chase.

DPS troopers stated the pursuit began after other drivers reported the tractor-trailer was being driven erratically.

Officials re-opened one lane of I-40 in each direction, near Ash Fork after about two hours, according to the Arizona Department of Transportation. Left lanes of both east- and westbound I-40 remained closed for an extended period Sunday, leading to a 14-mile backup of traffic on Interstate 17 in the afternoon from Flagstaff toward Phoenix.

Full closure of I-40 happened before noon and until about 2:30 p.m. Detours had included Highway 89 and west of Williams, ADOT stated.

The pursuit began around Kingman and ended near Ash Fork, at about milepost 152, after officers put spikes on the road to puncture the vehicle’s tires, according to the Associated Press.

Authorities say the driver then ran away, and officers ended up firing shots at him. Preliminary accounts are that the driver didn’t have a gun but motioned as if he had a weapon.

The driver wasn’t shot, but he did suffer non-life threatening injuries from a police dog that captured him.

To stay up to date with the latest highway conditions around the state, visit the ADOT Traveler Information Center at az511.gov, call 511 of follow us on Twitter (@ArizonaDOT).