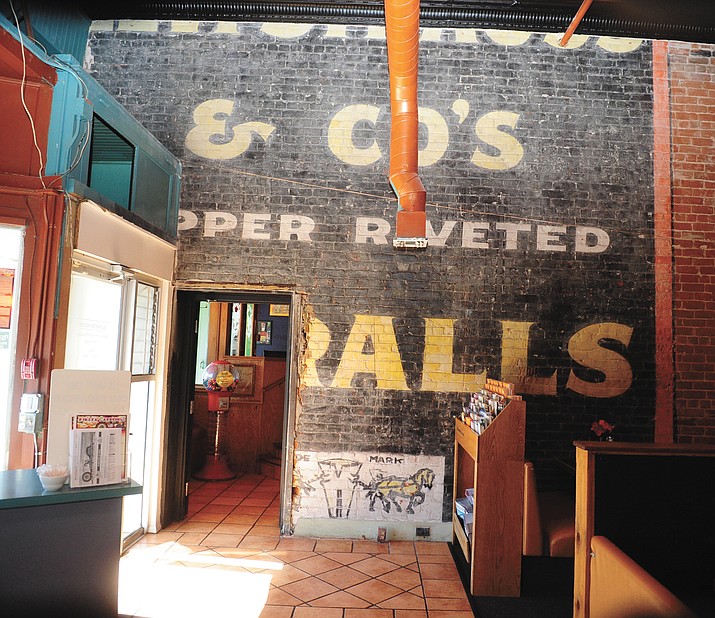 PRESCOTT - El Charro Mexican Restaurant and Cantina’s renovation last month quickly took on a life of its own after an unusual discovery.

While removing plaster from a brick wall on the south side of the restaurant’s lower dining space, an old painting began to surface.

To have some fun with the project, Gary Denny, owner of the restaurant, decided to host a contest on Facebook while the plaster was gradually chipped away.

Along with some photos of their progress, he posted this message: “As we are working on giving the main dining room a makeover, we’ve discovered this gem! So we’re going to play some El Charro Wheel of Fortune. We will be giving a $100 gift certificate to the one who guesses correctly what the entire sign says.”

Within three hours of the post, the correct guess was made.

Unfortunately, part of the advertisement was unknowingly knocked out as various changes have been made to the building in its long history, but what is left is quite extraordinary, said Tracey Panek, Levi Strauss & Co’s designated historian.

“I’ve only seen one such advertisement in person,” Panek said. “It’s pretty unusual to find them intact and in such good shape.”

After removing the plaster, which Denny said “came off amazingly,” he tried to clean the wall a little bit, but found the powdery paint of the about 20-by-20 foot advertisement was washing off.

Known as the Brinkmeyer building, the structure used to belong to the Brinkmeyer family, which ran a number of businesses in town throughout the late 1800s and early 1900s.

The Brinkmeyers quickly began construction of a new brick hotel that included a bakery in the basement and a bakery showroom and restaurant on the first floor.

Mark Favour, current owner of the building, bought it from the Brinkmeyers in 1972.

Though he had no idea the advertisement existed, he believes it was during this reconstruction phase that it was first painted — on what would have been the exterior of the building at the time.

“The south half of the building was built in 1901 and the north half was built in sections starting in 1905,” Favour said.

Favour deduces the advertisement could have only been viewable from the outside for a couple of years before getting built over.

“That plaster has been there a long time, a very long time,” Favour said.

Levi Strauss and Co. was incorporated in 1853 in San Francisco, California. The company started out by specializing in riveted overalls designed to hold up no matter the wear and tear of a working man’s daily demands.

“They were always referred to as overalls” Panek said. “We actually didn’t embrace the name ‘blue jeans’ until the 1960s because a lot of youths and teenagers were using that name and we finally adopted it.”

The company started advertising using flyers and the like initially, but around the turn of the century, it became well known for advertising its product on the outside walls of buildings.

“[The advertisements] would have included our famous two horse trademark,” Panek said.

This is evident toward the bottom of the painting within El Charro. Though part of the image is missing, two horses tied to a pair of trousers are shown trying to tear the resilient article of clothing by trotting in opposite directions. Right above the image are the words Trade Mark — also partly missing.

“We’re now a global company, but we started in the West and to see evidence of what we were selling back in the day in modern times is especially fun and meaningful,” Panek said.

Both Denny and Favour have indicated they have no intentions of disturbing the image further and hope to see it linger in history for many more years.