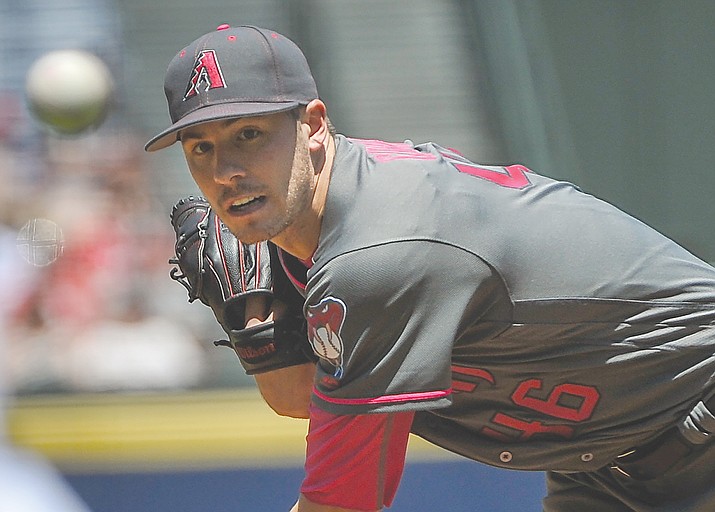 Arizona Diamondbacks’ Patrick Corbin pitches against the Atlanta Braves during the first inning of a baseball game, Sunday, May 8, 2016, in Atlanta.

A search in the Diamondbacks’ records wouldn’t have helped, because no other player in franchise history has hit two homers in a game on 0-2 counts.

Herrmann’s two-run drive off Jim Johnson with two outs in the 11th inning, lifted the Diamondbacks over the Atlanta Braves 5-3 Sunday for a three-game sweep.

“One home run is great,” Herrmann said. “But to hit two in one game is something else.”

The previous player in the majors to hit two homers in a game on 0-2 counts was Houston’s Lance Berkman on July 9, 2000, against Kansas City, according to STATS.

Herrmann, who plays behind catcher Wellington Castillo, has four homers in only 42 at-bats and could be bound for a bigger role.

“He’s going to earn himself a little more playing time when he’s not catching, possibly in the outfield or first base,” Arizona manager Chip Hale said. “He can play a lot of positions.”

Herrmann hit a seventh-inning homer off Mike Foltynewicz before the drive off Johnson (0-4).

The Braves (7-23) have lost four straight overall and are off to their worst 30-game start since at least 1900. They are 1-15 at home, including 10 straight losses. Only the 1913 Yankees, who lost their first 17 home decisions, had a worse home start, according to the Elias Sports Bureau. New York had one tie in that span.

“You lose today’s game after tying it and you sit in the dugout and you see guys’ faces,” manager Fredi Gonzalez said. “They’re wearing it pretty darn good. It’s not only me and the coaching staff. Everybody is wearing it. I was hoping to get a walk-off win just to get momentum going.”

Paul Goldschmidt walked opening the 11th and was forced on David Peralta’s grounder. After a video review of Goldschmidt’s awkward tumble into second confirmed no violation of the slide rule, Peralta stole second and Herrmann hit his fourth homer.

Randall Delgado (1-1), wearing pink high-top shoes for Mother’s Day, pitched 1 1/3 scoreless innings and Brad Ziegler got three outs for his seventh save in seven chances. A

tlanta loaded the bases in the ninth before Jeff Francoeur’s inning-ending groundout.

Francoeur’s two-run double in a three-run eighth tied the game.

Patrick Corbin threw seven scoreless innings and hit a run-scoring triple. He left with a 3-0 lead before Andrew Chafin gave up three runs in the eighth.

Corbin has thrown 23 2/3 scoreless innings in his career against Atlanta. He gave up five hits and one walk with five strikeouts.

Foltynewicz allowed two runs and five hits in seven innings and matched his career high with eight strikeouts. It was an important showing after he gave up three first-inning homers in a 4-1 loss at the Mets on Monday in his first start after he was recalled from Triple-A Gwinnett.

“Everything was just flowing well today,” Foltynewicz said. “I took my time between pitches. That helped me out a lot instead of getting up there and chucking it every 10 seconds.”

The Diamondbacks optioned RHP Enrique Burgos to Triple-A Reno and recalled RHP Archie Bradley, who will start on Monday at Colorado.

Diamondbacks: Peralta did not start due to what Hale described as residual effects from being hit by two pitches on his right wrist/forearm at San Francisco on April 20-21.

He entered in the eighth inning. ... OF-INF Yasmany Tomas is still being treated for a stiff neck as he was held out for the third straight game.

Diamondbacks: RHP Rubby De La Rosa, who had been listed as the starter for Monday’s game at Colorado, will have his start pushed back to Tuesday. Hale said De La Rosa is “100 percent, better than ever.”

Braves: Following an off day on Monday, RHP Matt Wisler is scheduled to start in Tuesday night’s home series opener against Adam Morgan and the Phillies.