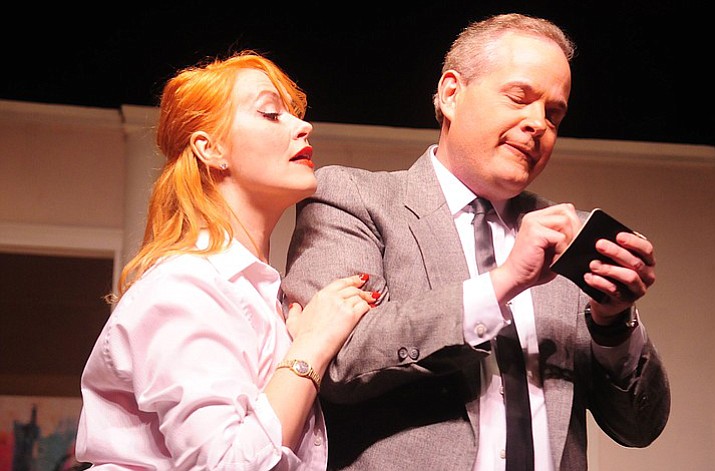 Cast members Daria Chlebecek and Nathan Wiggins during a dress rehearsal for the Prescott Center of the Arts production of Boeing Boeing that opens May 5 at the theatre at 208 North Marina Street. (Les Stukenberg/The Daily Courier)

A fast-paced farce, “Boeing, Boeing” is a great show that’s also downright hysterical. Concerning a man named Bernard, living in early 1960s Paris who is engaged to three different airline stewardesses – with him playing their schedules against each other – the show itself is fun to watch.

It builds up to become a hectic farce at breakneck speed when it just so happens that all three stewardesses’ schedules get changed to make it so that all three of them are at the apartment. In doing so, it hooks the audience in from the get go, even when it’s not at such a fast pace, and then keeps them sucked in for when the craziness happens. The audience is left on the edge of their seats waiting for what comes next.

Even if the mere concept of having to juggle three different women – who don’t know about each other – in one apartment wasn’t humorous enough, the show is chock full of humor. There’s a lot of physical comedy in the show with Bernard’s friend, Robert. At various points, he’s falling all over himself, struggling to get out of a bean bag chair, sliding across a coffee table and hugging two different handbags, pretending they’re his. Humor also comes from the very sharp wit of Bernard’s maid Bertha, played by Cargill. Most of what she says is covered in sarcasm and what isn’t are funny pointed barbs about the situation.

Humorous as it may be though, this play couldn’t have been what it is without the acting talents of its cast. Not only does Owen do a great job of making the physicality of his role very realistic, he also does a great job at pulling off incoherent ramblings. For instance, he tries to tell Bernard that the German Gretchen is in the apartment while Bernard’s got his arm around the Italian Gabriella.

The three women act very well too, with Bryan pulling off a perfect schadenfreude, Chlebecek presenting a great oversexed American, and Rolland doing very well as an affectionate and passionate Italian.

As a whole, the show is directed very well as Lanning once again displays how great he is at making sure his actors get timing perfectly, both with physical actions and dialogue. For the former, the actions have perfect precision, especially when one girl goes through one door, closes it and immediately another girl opens another door. When it comes to the latter, Lanning is able to bring out the best in the actors to not only have everyone’s chemistry perfectly match, but also to make it so that no one misses any beats in the dialogue.