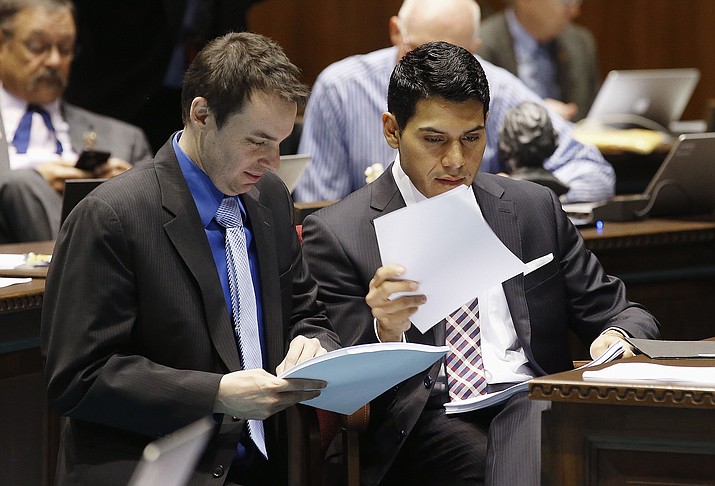 Rep. J.D. Mesnard, left, R-Chandler, talks with Rep. Steve Montenegro, R-Avondale, in the House during budget deliberations at the Arizona Capitol, Tuesday, May 3, in Phoenix. The Legislature gave final approval to the state budget early Wednesday.

The package came together after legislative leaders agreed to rescind a proposal to actually cut public education - at least this year. The final deal demanded by moderate Republicans ensures there will be no loss of funding for schools that are losing students, small charter schools and district-run charter schools.

But there was a price for all that: Arizona will remain the only state without a functioning KidsCare program.

Earlier this year Rep. Regina Cobb, R-Kingman, got 47 of the 60 legislators to vote to restore health care for about 30,000 children whose parents earn too much to qualify for Medicaid but are still below twice the federal poverty level. That is between about $27,700 and $40,200 a year for a family of three.

Funding was cut during the recession.

Senate President Andy Biggs, R-Gilbert, refused to give the bill a hearing. So Cobb sought to make it part of the budget, even though there was no cost to the state as the federal government would pick up the entire tab through 2017.

Cobb said, though, the plan fell victim to simple politics: Adding KidsCare to the budget package would have doomed the entire plan, including things she wanted like K-12 funding and more money for road repair and construction.

"And I was not willing to give up all of the other things for this one issue,'' she said.

"But it would explode the budget agreement we made,'' he said.

With KidsCare off the table, that left the adequacy of K-12 funding to be the central point of Tuesday's debate.

House Minority Leader Eric Meyer, D-Paradise Valley, said what the moderate Republicans got in the deal is hardly enough. He sought to restore $116 million cut from schools in prior years.

That drew opposition from Republicans who insisted the cash just isn't there.

One involves corporate income taxes which were close to 7 percent before the 2010 law to phase in a series of cuts. The rate is now 5.5 percent; if nothing is done, it will drop next year to 4.9 percent.

Another phases in a new method that multi-state corporations can use to reduce how much of their income is attributable to - and taxable by - Arizona.

Friese figures delaying those cuts for five years would leave the state with $200 million more by 2019 than it will have if the remaining cuts take effect. The GOP majority rebuffed his proposal.

Issues of revenues and education are linked.

That figure was not disputed by Rep. Justin Olson, D-Mesa.

But he said it does not reflect the quality of education offered in the state. And Rep. Jay Lawrence, R-Scottsdale, said he's not alarmed about Arizona's ranking.

"If that's what we're spending, we are getting more for our money than a lot of schools in America,'' he said. He cited the U.S. News and World Report which rated three Arizona schools among the top six high schools in the country.

Those, however, are all branches of the BASIS charter school system.

The claim of how well Arizona is doing despite its state funding drew an angry reaction from Rep. Reginald Bolding, D-Laveen.

"More than half of our students fail their 8th grade math assessment,'' he said. "We can't sit here and say our schools are being funded adequately.''

"When 87 percent of our students are not college ready in math, don't sit here and tell me our schools are getting the resources they need,'' he said.

The budget debate over K-12 funding has implications beyond the new budget. The ripple effects could determine the outcome of the May 17 special election for Proposition 123.

She said constituents who have been asking questions about whether to support the measure want to be convinced that the $3.5 billion that would be provided over the next decade -- about $300 a student per year -- is not the end of the aid but really, as Gov. Doug Ducey has promised, just a "first step'' to improving overall education funding. McCune Davis said failure to restore cuts now that the state has the money will do nothing to convince voters to approve the controversial measure.

Proposition 123 would end a 2010 lawsuit filed against the state for failing to comply with a voter-approved mandate to boost aid to schools each year to account for inflation. The Arizona Supreme Court already ruled lawmakers broke the law; what is still being litigated is how much is owed, both going forward and in missed aid.

But most of the money would come by making larger-than-normal withdrawals from an education trust fund, monies already set aside for K-12 funding.

"It's kind of like stealing someone's car and congratulating yourself for giving it back,'' said Rep. Ken Clark, D-Phoenix.

Rep. Bruce Wheeler, D-Tucson, said the failure of lawmakers to use some of the cash it has to restore education funding shows voters that Proposition 123 "is nothing but a bucket of empty and worthless promises.''

"People of Arizona are beginning to see what a sham 123 is, particularly when an amendment like this (to boost school funding) does not pass,'' Wheeler said.

"If 123 does fail, it will be because a majority of Arizonans see through the smoke and mirrors of this false promise that has nothing behind it,'' he continued. Wheeler said the refusal to add to school funding shows "that the legislature is not serious and Gov. Ducey is even less serious about funding K-12 education.''

And Rep. Stefanie Mach, D-Tucson, said the failure to boost funding will lead to "an erosion of trust'' by voters who may turn around and defeat the ballot measure.

"Yet all I hear is complaining,'' she said.

But Sen. Olivia Cajero Bedford, D-Tucson, pointed out $5.5 million of that is earmarked for "economic freedom schools'' at the University of Arizona and Arizona State University that were established with seed money from foundations run by the Koch brothers. Even more insulting, she said, is that William Boyes, founder and director of the Center for the Study of Economic Liberty at ASU, has written that there should be a more "free market approach'' to K-12 education, saying a goal is to "get rid of public education, create private education as a replacement, and have a market for education.''

Why would you send taxpayer money to an institution whose entire purpose is to advocate for not sending taxpayer money to public education?'' asked Sen. Steve Farley, D-Tucson. Sen. Martin Quezada, D-Phoenix, was more blunt.

"Fund your own damn non-degree conservative institution,'' he said of the Koch brothers.