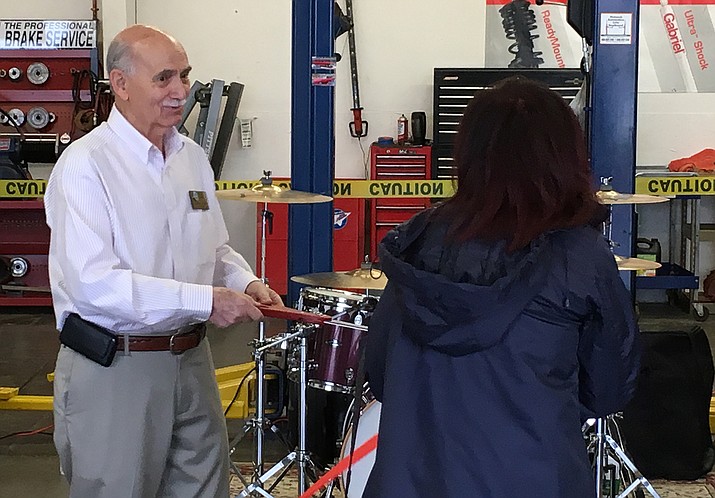 Vice-Mayor Darryl Croft helps Chino Valley Chamber of Commerce CEO/President Arlene Alen prepare for a ribbon cutting Saturday at Morrison Motors. Croft is a member of the board of directors for the chamber. Croft is running for mayor this year. (Ken Sain/Review)

Candidates circulating petitions for each office as of Sunday, May 1.

Chris Marley and Cesar Lizarraga have taken packets, but were not circulating as of Sunday.

Marley said if he runs it will be for mayor.

Lizarraga said he will not be filing for this election because of time constraints.

There will be at least one new member of the Town Council after this year’s election as it stands now.

Vice-Mayor Darryl Croft is running for mayor, even if his good friend, current Mayor Chris Marley, decides to seek reelection. Marley said he will make a decision on running for reelection in the next two weeks but has ruled out running for any seat other than mayor.

“I think we were having coffee one morning and [Croft] told me he was going to run against me,” Marley said. “How cool is that? He’s a worthy candidate. If he had run against me when I first tried to win this, I have no doubt he would have beaten me.”

Marley said he is pursuing a position in his ministry and if that position opens up, then he would likely not seek reelection. But, if not, then he is open to running against his good friend for the top office.

“Our friendship will be fine,” Marley said. “To me, it’s a win-win. Darryl Croft as far as business sense, and business education knows more than me. He has helped me immensely in these past five years.”

To be on the August primary ballot candidates must submit at least 81 qualified signatures by June 1 to Town Clerk Jami Lewis.

Croft also said he does not think that if it is the two of them running for the top office that it will put a strain on their friendship.

“Absolutely not, not as far as I’m concerned,” Croft said. “I think it should be interesting. He’s one of my best buddies, so we’ll have fun with it. One of us will be mayor, and the other will go home.”

he other five members of the current Town Council all plan to seek reelection. all five are collecting signatures. Lon Turner, only decided to run late last week and began collecting this week. He said he made the decision while driving back from Phoenix on Thursday.

Cesar Lizarraga has taken out a candidate’s packet, but he said Tuesday that he's too busy at this time with his job, so he won't be filing for this election.

Cuka, Mendoza and Miller were all appointed to the council following resignations, so they will be trying to win their seats in an election for the first time.

The 81 signatures needed for candidates to collect was determined by state law, which is 5 percent of the vote cast for the highest office in the last election (in this case, 2013), Lewis said. She added candidates should not submit more than 161 signatures. That limit is also set by state law.

Anyone interested in running who has not picked up a packet may still do so, so long as they return the required signatures by June 1.

In addition to the seven open council seats, residents will be voting to renew the alternative expenditure limitation option, or home rule, on the August ballot.

A yes vote means that the Town Council will decide how much money it can spend. A no vote means the town must abide by limits in the state constitution that are based on a formula that starts with how much money the town spend in 1978. It would mean cutting spending by more than 50 percent of the current budget. Yes or no, the measure has nothing to do with how much revenue the town collects, only how much it spends.

The home rule option must be renewed by voters every four years. It has only been rejected once in Arizona history, by Florence in 2014. That town’s residents passed an exemption to it almost immediately after it was rejected.