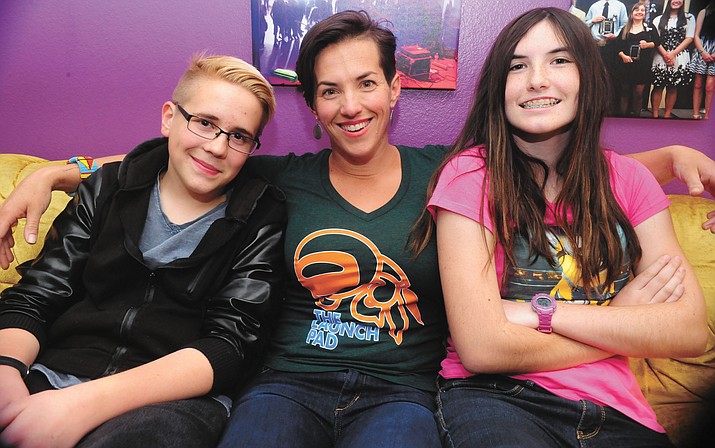 Courtney Osterfelt, center, is the executive director of the Launch Pad Teen Center in Prescott with Steven Staltari and Sue Rose Sena.

The Daily Courier lists its inaugural 20 Under 40 winners today, for which readers honored 20 area entrepreneurs, managers, business owners and professionals younger than 40.

Fourteen years ago, Courtney Osterfelt had the idea to start the Women’s Empowerment Breakthrough (WEB) as her senior project at Prescott College. Having started out as a conference to help teenage girls explore, define and achieve their goals, the non-profit effort eventually blossomed into much more.

Courtney at a glance

Director at The Launch Pad, founder of the Women’s Empowerment Breakthrough (WEB)

“After a decade of hearing girls ask for more I decided that we needed to start a teen center,” Osterfelt said.

With community support, Osterfelt successfully opened that teen center two-and-a-half years ago, calling it The Launch Pad. Working as the non-profit’s executive director, Osterfelt has managed to raise enough money in the last year to incorporate a full-time paid Program Coordinator and a part-time After School Program Facilitator. The organization offers an internship program, a leadership program, after school programs, monthly music shows, dances, volunteer programs and educational workshops.

The best part of the gig: “I get to play as much as I work,” Osterfelt said. Every week she can expect to laugh with teens, play games, create art, and much more.

Most of the time, she’s striving to raise money for The Launch Pad, build connections and partnerships for the programs and market them. However, she finds it critical to spend time with the teens she is working so hard to help.

“It reminds me of why we do what we do, and it gives me time to truly hear from our teens and learn from them about how we can do our best to create positive change in their lives,” Osterfelt said.