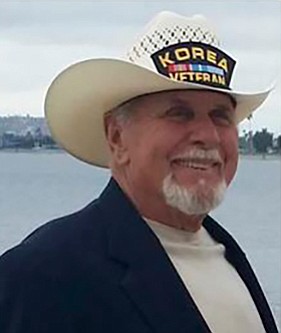 George passed away peacefully on Tuesday, March 22, 2016, at the age of 83, with his wife Sylvia lovingly by his side. Family members from around the United States were sending love and prayers.

George was a wonderful family man and friend with a huge personality, funny, loving and the life of the party. If you were lucky enough to meet George, you would never forget him. He left a lasting impression on so many people.

George served in the U.S. Coast Guard during the Korean War from 1952 to 1956 and was currently a member of the Prescott KVWA Chapter. He loved

marching in the downtown parades

and enjoyed visiting the patients at the VA hospital from the time he and his wife Sylvia moved to Prescott in 2005.

George was born in Port Angeles, Washington to George Schlotterbeck Sr. and Louise Hotchkin, grew up in San Clemente, California and attended high school in San Juan Capistrano, California. He retired from Sparkletts in 1989. He was an avid sailor and fitness buff. His love of the ocean stayed with him his entire life.

George is survived by his wife Sylvia Schlotterbeck; sons