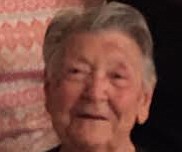 Ada May Whitney, 99, of Mountain View, Missouri, departed this life on March 24, 2016, at Mountain View Healthcare. She was born Sept. 9, 1916, in Garfield, Kansas, the daughter of William Luther Delling and Rissie Mae (Foss) Delling.

She was preceded in death by her husbands, Herschel DeBoard and Vern Whitney; her parents, William and Rissie Delling; and one son-in-law, Jim Black.

After 60 years of living in California and Arizona doing various jobs, Ada and Vern enjoyed being Snow Birds. She loved to quilt, paint pictures, work at Senior Casa, and playing cards. She could beat all of her family and friends at cards, even though she was legally blind. Her last request was to come “home” to Mountain View.

A memorial service will be at 11 a.m. on Saturday, April 2, 2016, at Yarber Chapel, Mountain View, Missouri, with Brother James Duddridge officiating. Cremation arrangements were under the direction of Yarber Mortuary, Mountain View. Condolences may be expressed at www.yarbermortuary.com.