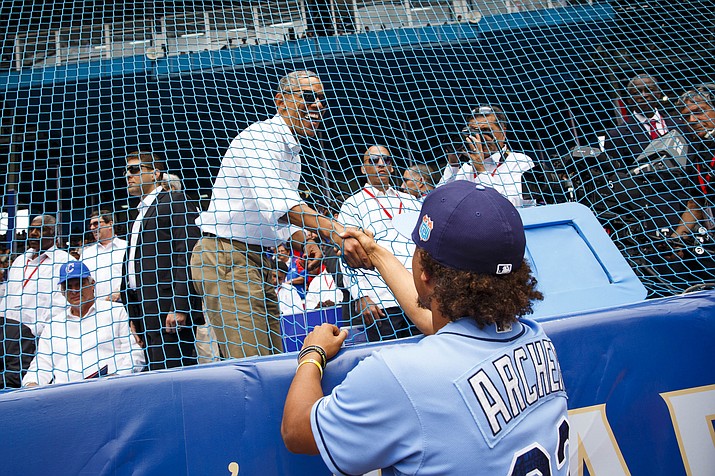 Baseball diplomacy was on display last week as the Tampa Bay Rays traveled to Havana to play the Cuban National Team in an exhibition game, the first of its kind since the Orioles played there in 1999.

The audience – including yours truly – witnessed a truly historic event. President Barack Obama entered the stadium with his Cuban counterpart, Raul Castro. The two leaders sat side by side during the game before exiting after the third inning. It’s been 88 years since the last sitting U.S. president, Calvin Coolidge, visited Cuba, a country that’s been mostly off limits to U.S. citizens for 55 years.

The pre-game pageantry was unlike anything seen in this country. There were dancers on the field accompanied by loud music. As each player was introduced, they walked out onto the field hand-in-hand with a Cuban child clad in a tiny baseball uniform. A choir sang each country’s national anthem, which was followed by the release of a flock of doves from centerfield. Then more music followed as Rays players danced their way back to the dugout cradling precious cargo – tiny tots - in their arms.

As if that wasn’t enough to choke-up the most staid observer, the Rays leadoff batter was outfielder Dayron Varona who defected from Cuba three years ago. His teammates stood on the top step of the dugout and applauded as he was introduced by the PA announcer. After making the first out of the game, the entire Rays team came out onto the field to greet him as he trotted back to the dugout, to the cheers of the largely Cuban audience.

Other American dignitaries behind home plate included MLB Commissioner Rob Manfred and his second in command, Chief Legal Officer Dan Halem who negotiated the game with the Cubans, Hall of Famers Dave Winfield and Joe Torre, along with Hall of Famer to be, Derek Jeter. Secretary of State John Kerry, other State Department officials and upwards of 30 members of Congress were also in attendance.

Admission to the game was free. U.S. citizens received their tickets through MLB while most of the tickets were parceled out to Cubans who were “friends of the state,” government officials and workers who were unlikely to protest or cause a scene. However, a handful of protestors distributing pamphlets and calling for government reforms interrupted ESPN’s Bob Ley as he was doing a live post-game segment for SportsCenter. They were quickly subdued and arrested by police.

The Rays won the game, 4-1, but Cuba, the U.S. and MLB all had their sights set on something beyond the final score. Cuba is hopeful of cementing an agreement with MLB whereby the league would pay the government for its loss of baseball talent. In the past five years, MLB has awarded more than $400 million in bonuses to Cuban players. At least 150 Cuban ballplayers have defected to the U.S. in the past year alone in search of similar riches.

MLB’s prime motivation is to reach an arrangement where member teams can acquire talent at a lower cost. That motivation is disguised in language suggesting its primary concern is for the safety of ballplayers and their families who risk their lives defecting from Cuba in leaky rafts. And Obama wants more freedoms for the average Cuban citizen, along with the opening of new trade markets for U.S. businesses.

None of those goals are easily attainable. While the embargo remains in place, direct payments to the Cuban government are prohibited. And after decades of mistrust, it will take time before normalization of relations between the two countries occurs.

After the game, players from both teams congregated on the field, hugging each other and exchanging uniforms. But not everything about the game was perfect. Estadio Latinoamericano, where the game was played, is a relic of pre-Castro days. MLB sunk millions into refurbishing the facility including a new paint job, clay infield, sod and roof section. While it looked “presentable,” clubhouses and dugouts don’t measure up to professional baseball standards and fan amenities are nonexistent. Many of the rest rooms didn’t work and lines were 50 deep to use the few porta potties around the facility.

But this wasn’t about baseball per se. It was about diplomacy. And on this day, baseball played its part to perfection.


Jordan Kobritz is a former attorney, CPA, and Minor League Baseball team owner. He is a Professor and the Chair of the Sport Management Department at SUNY Cortland. Jordan maintains the blog: http://sportsbeyondthelines.com and can be reached at jordan.kobritz@cortland.edu.