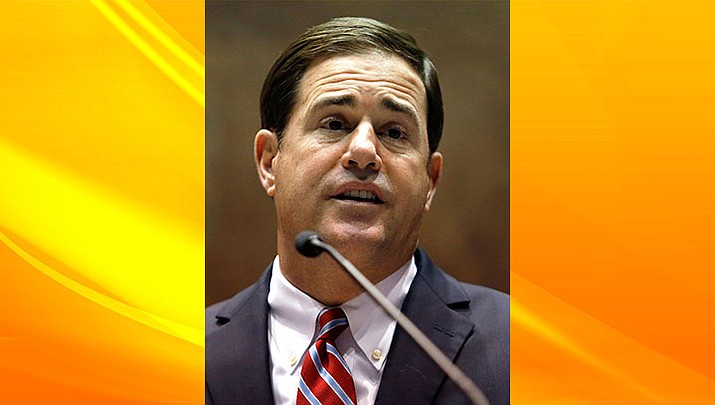 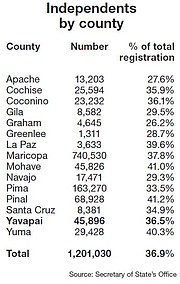 PHOENIX - Parting ways with members of his own party, Gov. Doug Ducey said Wednesday he wants to keep the state’s presidential primary and open it up to currently disenfranchised political independents.

Ducey said in a prepared statement he found it “unacceptable” that voters in the state’s largest county had to wait in long lines Tuesday - with some voters saying they had five-hour waits - simply to cast a ballot.

“Our election officials must evaluate what went wrong and how to make sure it doesn’t happen again,” the governor said. And Maricopa County Recorder Helen Purcell has admitted she severely underestimated the number of people who would decide to go to the polls on election day.

Ducey said part of the problem appears to be that a large number of independents sought to vote despite the fact that current Arizona law limits the presidential primary to only those registered with the parties whose candidates are being selected.

Those include people who showed up and insisted on voting despite the fact their names could not be found on the voter rolls of any of the parties holding primaries. More to the point, those votes will not count unless they can show they were, in fact, registered with a party.

“That’s just wrong,” the governor said. “If people want to take the time to vote they should be able to, and their vote should be counted.”

The comments come a month after the House, largely along party lines, voted to make Tuesday’s vote the last-ever presidential primary.

That move came at the behest of Secretary of State Michele Reagan. She told lawmakers there was no reason for the state to finance the quadrennial event what with nearly 37 percent of the state’s 3.2 million registered voters being unable to participate by virtue of not being registered with a political party that is choosing a candidate.

And Reagan said she had no indication that the parties would voluntarily go along with opening the system to independents.

The legislation would leave it to each party to decide how to choose its presidential candidates in 2020 and beyond. That could be everything from a caucus system to having the parties contract with - and pay - counties to run their own closed primaries.

Gubernatorial press aide Daniel Scarpinato said his boss opposes the legislation. He said the governor not only wants to keep the state-run presidential primary but open it up to everyone.

“The governor’s view is that people who take the time to vote who are registered voters, that their votes should be counted,” he said. “The fact that more people want to participate is a good thing.”

Scarpinato said there is precedent for giving independents a voice.

Prior to 1998, the primary elections for federal, state and local offices were like the presidential preference: limited to those registered with that party. That year, voters agreed to allow independents to participate to a limited degree, permitting them to choose the ballot of either major party.

That measure did get the support of both Democrat and Republican officials - though not necessarily because they liked the idea. Instead, they saw it preferable to an alternate ballot measure to create a wide-open primary where voters would get to pick and choose among races, for example, casting a ballot in the Republican gubernatorial race while wanting a voice in a Democrat legislative race.

Scarpinato said that makes the presidential primary the lone exception.

“Let’s make it consistent so everybody understands the rules,” he said. “And the county election officials can plan accordingly.”

Scarpinato also made it clear that Ducey thinks the problems that developed Tuesday did not have to happen.

“It looks like a lot of the other counties throughout the state didn’t have this issue,” he said. “They needed to have more polling places.”

In prior elections, County Recorder Helen Purcell had set up polls in each of the more than 200 voting precincts. This time, however, Purcell established 60 polling centers.

On one hand, that provided more flexibility for voters: They could cast a ballot at any of those places. But the sheer number of people turning out overwhelmed the system, with people still in line to cast their votes past 10 p.m., three hours after voting was supposed to end.

Scarpinato said his boss wants to be sure there are more voting locations for future presidential primaries.

Reagan spokesman Matt Roberts said his boss is willing to go along with keeping the primary and even opening it up if the Legislature agrees to go along.

Voters must commit to party: Monday is deadline to register for Presidential Preference Election
Independents: Keep primary, just open voting to everyone
Voters must be registered Democrats or Republicans during primary
Editorial: State's primary election system needs revision
Secretary of State did not question lack of polls; Recorder admits she underestimated