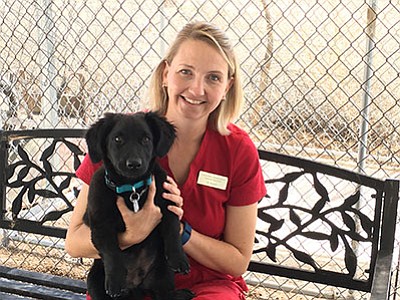 National Puppy Day - which is Wednesday, March 23 - was started to promote adoption across the nation.

There's not a lot of promotion required in Chino Valley.

"We have about 150 that are adopted, and from that number we have between three and seven a year that are euthanized," said Angela Olander, Chino Valley's animal control officer.

Those that are euthanized are usually because they are too sick to be treated. But not all sick animals share that fate. Last fall Piper, a four-month-old Labrador retriever mixed puppy, needed help. She was diagnosed with Spindle Cell Sarcoma, an aggressive form of cancer.

The community rallied to help Piper, raising $2,400 for the three treatments she needed.

"With Piper, that was kind of a rare deal with her being so young, being diagnosed with cancer," said Debby Korell, an adoption specialist at the Chino Valley Animal Shelter.

And then did find Piper a home. Chino Valley residents have adopted other dogs who have needed some medical care, or a recent one who was missing an eye.

There was a time when pit bulls had a hard time being adopted, but Korell and Olander said that's no longer the case.

Korell said the key for a dog finding a home is how friendly the dog is when the family visits. For example, one recent dog - Lizzy - was very friendly with people outside of her space inside the shelter. But, if you saw her in that space she became very territorial.

"She was going to protect her space," Korell said.

So they learned it was best to show her to families in the yard rather than inside the shelter.

Most dogs at the Chino Valley animal shelter are there for about two weeks before they find a home, Korell said. The longest it's taken for a dog to find a home has been about six months. In that case, it was a dog who didn't get along well with other dogs.

The generosity of Chino Valley residents help each of the dogs visit a dentist for needed work in addition to the occasional medical expenses, Olander said.

The dogs are strays around town that Olander picks up. About half of the 300 dogs she captures each year are lost and later reunited with their families. The other half are available for adoption.

Korell said that the shelter is currently asking Chino Valley residents to donate for an artificial grass area that they can play on. Now, they are running around on dirt and gravel.

It costs $100 to adopt a dog and $80 to adopt a cat. The fee is to cover the cost of the medical examination and to ensure it is brought up to date on shots while at the shelter.