Presidential candidates focused on Arizona ahead of Tuesday 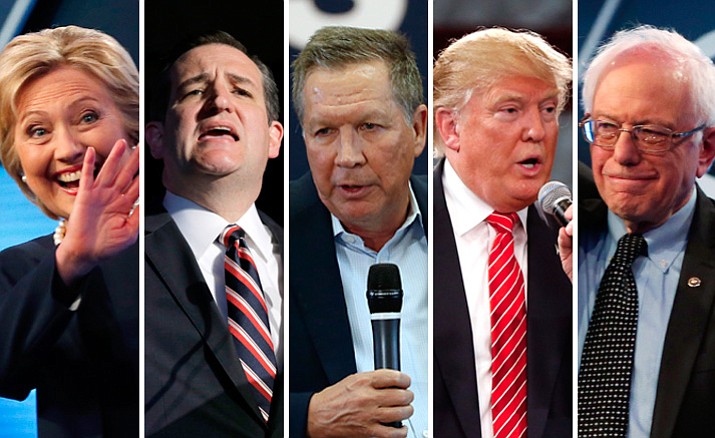 LAST DAY: Today, March 18, is the final day to cast a ballot in person at the county building, 1015 Fair St., Prescott.

NO MAIL: Do not mail early ballots now, if you have not done so already; postmarks do not count. Drop off your ballot at any Yavapai County Drop Box location until 7 p.m. Tuesday, March 22.

ON TUESDAY: If you plan to visit a Vote Center on election day, remember to bring a photo identification.

CALL: 928-771-3248 for more information. Drop box locations are at www.yavapai.us/electionsvr.

PHOENIX - Presidential candidates are focused on Arizona as the state’s primary looms, with four of the five remaining Democratic and Republican hopefuls planning visits to the state in advance of Tuesday’s election.

Former Secretary of State Hillary Clinton and Sen. Bernie Sanders plan campaign stops as they try to win the Democratic nomination. Sanders appeared Thursday near Flagstaff and plans Tucson and metro Phoenix events today, March 18. He held a campaign rally Tuesday night in Phoenix without mentioning a string of losses that night in primaries that saw Clinton’s delegate lead grown.

Clinton plans a visit to Phoenix on Monday.

Sanders faces an uphill battle nationally as Clinton is more than two-thirds of the way to grabbing the 2,383 delegates she needs to clinch the nomination. She has strong backing from a large number of Democratic-elected officials in the state and a majority of the superdelegates. Arizona has 85 Democratic delegates at stake Tuesday.

Still, Sanders’ campaign is pushing hard to gain voter support in Arizona and the other states holding Democratic caucuses on Tuesday, Idaho and Utah.

“The reason that people are coming out in large numbers to rallies for Bernie like they did in Phoenix the other night and like we expect to see all around the state in the next couple of days is not because some establishment type has told them how they should vote,” Sanders campaign spokesman Michael Briggs said Thursday. “It’s because they are drawn to his ideas about how to fix the rigged economy and the corrupt campaign finance system that props it up.”

On the Republican side, Trump has a lead in delegates but still needs to win a majority of the remaining delegates to get to the 1,237 he needs to avoid a convention fight. Cruz is well behind, and an Associated Press analysis shows he can’t get enough delegates to win outright. He and Kasich are angling to keep Trump from securing the nomination outright. Arizona has 58 GOP delegates available in the primary Tuesday, when Utah also holds its caucus.

Trump drew huge crowds at events in Phoenix in July 2015 and in suburban Mesa in December, capitalizing on GOP voters’ concerns about immigration in a border state that has been on the front lines of the battle over immigration reform. The state’s two U.S. senators, John McCain and Jeff Flake, sharply criticized his stance before the July event.

Cruz hasn’t held major campaign rallies in the Republican-leaning state but has support from conservatives. On Wednesday, he picked up an endorsement from U.S. Rep. David Schweikert, a Republican who represents Arizona’s 6th Congressional District.

“It’s clear that Ted is the conservative leader that we need as our next president, and my wife Joyce and I are proud to give him our strongest endorsement,” Schweikert said in his message. “In the upcoming Arizona presidential preference primary, Ted is the clear choice for voters who want a conservative president who is truly committed to fixing the mess in Washington.”