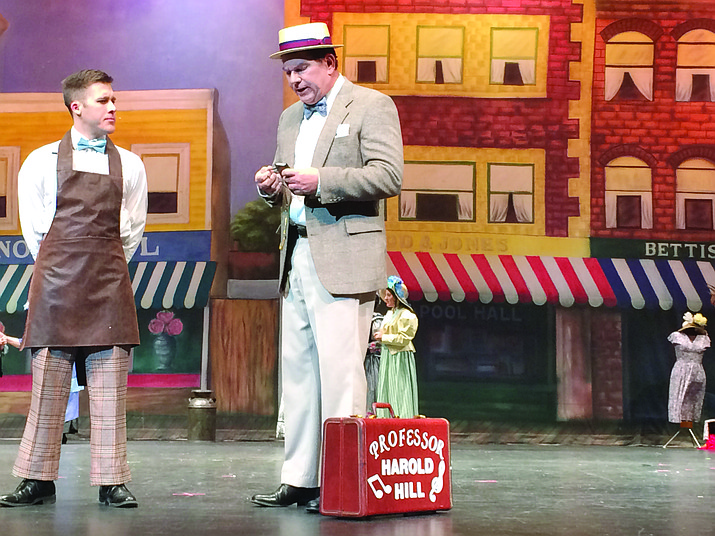 Step away from the pool tables and get into the Yavapai College Performing Arts Center, 1100 E. Sheldon St., as the college Music Department puts on Meredith Wilson and Franklin Lacey’s “The Music Man.”

Directed by Nanette Hofer, director of musical theater, the show runs Friday, March 12, through Sunday, March 20, with showtimes at 7 p.m. Friday and Saturday and at 3 p.m. on Sunday. Tickets range from $10 to $35 and can be purchased at www.ycpac.com.

Hofer wanted to put on “The Music Man” because of the emerging talent in the new musical theater program, she said.

“They need to know more about these older musicals,” Hofer said, noting that “The Music Man” has stood the test of time. “It’s a good way to teach them not only about the history, but the style. And we’re still doing them, Broadway’s still doing them.”

Not only is the show a good one for the students, but for the community as well as the audience can walk away singing just about every song in it, Hofer said. Further, it’s about a close-knit community, which is how Hofer see’s Prescott.

The biggest challenge to putting together the show has been juggling all the schedules, Hofer said. More than 100 people auditioned and she cast about one-third of them, she said. With about 60 people in the show, she had to juggle school schedules, adult schedules and community schedules.

The show is a celebration of talent, with the youngest performer being about 6 years old and the oldest being in his 70s, Hofer said.

“I want my students to know this, but I want the little, younger kids to see that too, that the stage is perfect for that … we celebrate each other and we really become a family when we do shows together.”