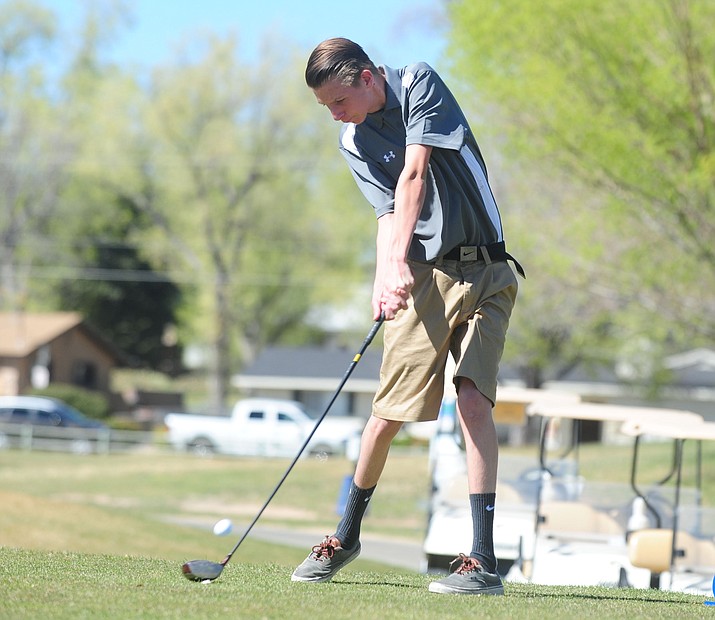 “This is the proudest I have been in my five years as the coach of Chino Valley High School,” Behm said. “The team shot the lowest team score in my tenure.”

Not only did the Cougars reach a scoring milestone under Behm, they faced three of the four highest-ranking foes they will battle during the regular season.

Playing on the South Course, second-year player Jared Minkus “exhibited his tenacity to be a competitive golfer,” Behm said. A good example was Minkus making par on the eighth hole, a 176-yard par 3, with a 15-foot putt.

Minkus finished with a team-leading score of 42, just three shots off the winning score of Kingman Academy teammates Matthew Suh and Raphael Choi.

Last week against Camp Verde and Paradise Honors, Minkus experienced a “bad day every golfer experiences,” Behm said, but he didn’t let it get to him.

“Instead of developing a negative attitude about himself, he put a lot of ‘range time’ in this week to work on the aspects of his game he needed to improve,” the coach added.

Also on Thursday for the Cougars, CJ Knight and Tyler Gianfrancesco carded 47s, with Rory Stupak contributing the fourth qualifying score of 48.

Sophomore Wyatt Dodds also had a good day in his first varsity match, Behm said. First-year player Kylee Rabe-Mazza, playing in the developmental foursome, “demonstrated she soon may be challenging for a qualifying spot on the team.”

Chino Valley will move on and play host to Bagdad and Camp Verde at Antelope Hills at 2 p.m. Wednesday, March 23.

In the top of the eighth inning, Kody Jones hit a double and Griffin Hays had an RBI single to hand Prescott the lead for good. Desert Vista led off the bottom of the eighth with a solo homer to cut the Badgers’ lead to 6-5, but Prescott reliever Justin Warren forced a grounder and two fly-ball outs to end it. On the mound, Jones earned the win, allowing one run on six hits in 4-1/3 innings. Taylor Goffena threw two-thirds of an inning in the fifth before giving way to Warren, who tossed three solid frames.

At the plate for Prescott, Dawson Winslow went 1-for-2 with a double and two runs scored. Jose Chairez was 1-for-3 with a two-run homer. Matt Mendibles (2-for-4, RBI) and Cole Kelley (2-for-2, run) also fared well.

The Badgers, who compiled a 4-1 mark at the Classic, will play host to Desert Edge in Division II, Section V play at 3:30 p.m. today, March 18, at their campus field in Prescott.

The Roughriders’ record improved to 18-10 overall.

Yavapai scored three runs in the first inning and exploded for 16 runs in the third, powered by home runs from Ramsey Romano and Brock Ephan.