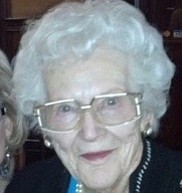 She was met in heaven we know with great joy by her husband C.T. “Bud” Bunger, daughter Joyce Kieckow and sons Richard E. Bunger and Gary K. Bunger.

Naomi was an only child, born to Millard and Zellah Knight on April 9, 1917, in English, Indiana. When she was 8, the three of them moved to Tucson to better care for her mother, who was suffering from tuberculosis. Seven years later, they moved to Phoenix because her father had taken a job as head “chef” at the Arizona State Hospital. It was there that Bud, who ran the dairy for the hospital, first laid eyes on her. “That’s the girl for me,” he declared.

They eloped on Nov. 17, 1934, when Naomi was just 17. With the help of an aunt, Naomi snuck out of the house, and she and Bud were married. They then climbed into his Model T and drove up Yarnell Hill to spend their first night together in Prescott at a little motor lodge on White Spar Road.

She and Bud led a life of adventure. Together they ran a gas station in Denver, dairies in Arizona, raised tobacco in South Carolina, survived the depression, had a lumber business in Show Low, a moulding mill in Snowflake, a sawmill in Flagstaff, and finally made their “million” by starting Arizona Storage Rental in Phoenix, ultimately retiring in Prescott around 1980. They were married for 58 wonderful years. Together they left a legacy of self-employed entrepreneurs, college graduates, professionals, homemakers and artists.

Naomi was in all respects the epitome of the saying, “Behind every great man there is a woman.” As a wife and homemaker, she was a rock, steadfast in her faith, deeply committed to her husband, their children, their home, and to the care of her parents and Bud’s family. Being an only child, her passion was to be surrounded by and to serve her family and all who entered their home. She personally left a legacy of her faith. She loved the Lord, the Bible, her church, and was deeply devoted to prayer. She was a true living example of a Proverbs 31 woman.