Column: Sharapova use of drug - intentional or carelessness? 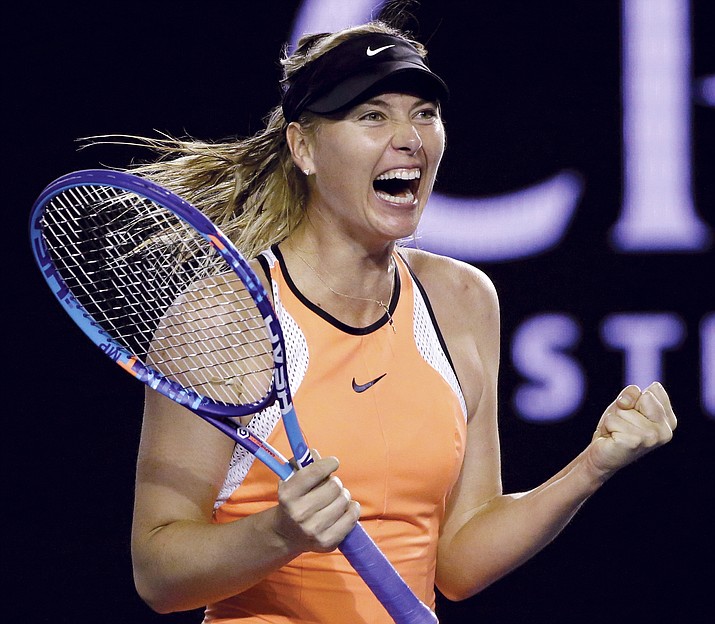 In this Sunday, Jan. 24, file photo, Maria Sharapova of Russia celebrates after defeating Belinda Bencic of Switzerland in their fourth round match at the Australian Open tennis championships in Melbourne, Australia. Sharapova's racket supplier became the first main sponsor to publicly back the five-time Grand Slam champion after she admitted to failing a doping test. Austria-based company Head announced Thursday, March 10, it was planning to extend its sponsorship deal, three days after Sharapova revealed her use of the banned substance meldonium.

As drugs go, this one was at least easy to spell and easy to pronounce: meldonium. But it is no less dangerous to an athlete than a drug that is difficult to pronounce and impossible to spell, like tetrahydrogestrinone, a drug that many athletes have been accused and/or convicted of taking, including former track star Marion Jones. If you don’t believe that, just ask Maria Sharapova.

Last week, Sharapova called a press conference to announce that she had failed a drug test for meldonium at the Australian Open. Meldonium, which was developed in Latvia decades ago, is used to treat ischemia, a lack of blood flow to an organ, and neurodegenerative disorders. Sharapova said she had been using the drug - with a doctor’s prescription - for over a decade to treat a magnesium deficiency. She also said her family had a history of diabetes.

Until last fall, meldonium wasn’t on the World Anti-Doping Agency’s (WADA) list of banned substances. But on Sept. 30, WADA announced that meldonium would be banned effective Jan. 1, after it was found to increase oxygen intake and boost endurance. Sharapova admits to receiving a letter from WADA but says she never opened it. She has been banned from tennis provisionally and faces a suspension of up to four years. However, because this is her first failed drug test, the suspension is likely to be for no more than one year. She already forfeited the $400,000 she won at the Australian Open and now faces the prospect of missing this year’s Olympic Games in Rio.

Any suspension, which will be determined by the International Tennis Federation, would be costly to both Sharapova and the Women’s Tour. She is the second winningest player on the tour with career earnings of $37 million, second only to Serena Williams who has earned more than $75 million. While Sharapova has won only five Grand Slam titles to Williams’ 21, she has earned tens-of-millions of dollars more than her rival off the court thanks to her good looks and sultry figure. In addition to the eight-year $70 million deal she signed with Nike in 2010, Sharapova has a number of endorsement deals with high-end companies such as Porsche and TAG Heuer.

Nike has suspended its deal with Sharapova until further notice. TAG Heuer claims its contract with the tennis star expired at the end of 2015 and the parties have been in negotiations on a new deal. Those talks have now ended. And Porsche said it had postponed planned activities with Sharapova “until further details are released and we can analyze the situation.”

How much of a boost does meldonium provide to an athlete? WADA didn’t cite any specifics when it announced the ban but this is the same organization than once banned hyperbaric chambers because athletes were breathing too much oxygen. The agency has also flip flopped on caffeine, which is a documented performance enhancer, first permitting its use, then banning it and finally, reversing course and removing it from the banned substance list.

Sharapova’s actions may have been intentional or a result of carelessness. Former WADA chief Dick Pound, never one for subtlety, called them “stupid.” We’ll never know for sure why she ended up with meldonium in her system. What we do know is she isn’t the first Russian athlete to fail a test for the drug. At least five other Russian athletes in various sports have tested positive for meldonium, suggesting that Russian authorities may have intentionally prescribed the drug for other than medical reasons.

Professional players on both the men’s and women’s tours are subject to in-competition and out-of-competition drug tests. The top 50 singles players and the top 10 doubles players are required to divulge their whereabouts at all times in order to be available for unannounced testing. Some of the sport’s biggest names, including Williams, Roger Federer and Novak Djokovic, have reportedly been tested 10 or more times in a single calendar year.

Meldonium may be easier to pronounce and spell than other performance enhancers, but the consequences of using it are much the same: A star athlete tainted for life; a sport badly in need of stars devastated; and a public already suspicious of athlete denials and explanations left to ponder one more.

Jordan Kobritz is a former attorney, CPA, and Minor League Baseball team owner. He is a Professor and the Chair of the Sport Management Department at SUNY Cortland. Jordan maintains the blog: http://sportsbeyondthelines.com and can be reached at jordan.kobritz@cortland.edu.