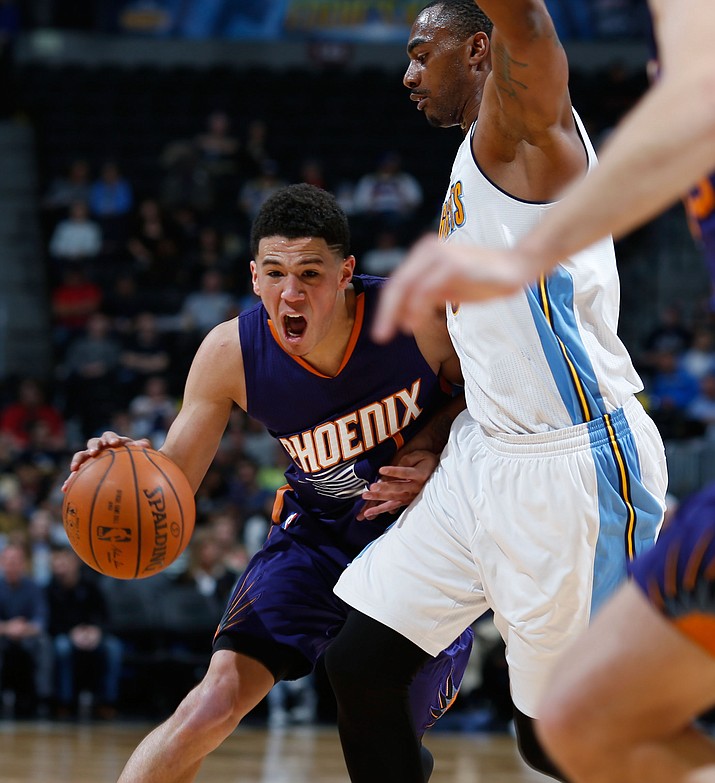 DENVER (AP) — Emmanuel Mudiay scored a career-high 30 points in a matchup of rookie guards, and the Denver Nuggets beat the Phoenix Suns 116-98 on Thursday night.

Nikola Jokic had 18 points and 10 rebounds and Will Barton had 17 points and eight rebounds for Denver, which has won three straight.

Mudiay hit 13 of 20 shots but didn't outscore Phoenix rookie Devin Booker, who had a career-high 35 in the loss. Booker scored 25 in the second half when the Suns made a run to briefly lead.

Booker continued his strong rookie season by scoring in double figures for the 27th time in the past 30 games. He had 32 points Wednesday night in the Suns' home loss to New York.

Booker had 16 in the third quarter when the Suns wiped out a 15-point deficit to take a 70-69 lead on a 3-pointer by Mirza Teletovic.

Denver, which had led the entire way until that shot, responded with a 13-4 run to end the third.

Barton started the fourth with a steal and a dunk to make it 84-74.

The lead got to 11 but Phoenix, playing for the second consecutive night, got within seven on a basket by Jon Leuer, who finished with 19 points.

Denver took over from there. Mudiay hit a driving layup and Jokic scored five straight points to make it 107-91 with 2:13 left.

Phoenix interim coach Earl Watson still owns a house in Denver from his brief stint with the team 10 years ago. He currently leases it to Denver G Will Barton.

Suns: G Brandon Knight scored 10 points in 25 minutes in his first game since Jan. 19. He didn't play Wednesday in the loss to New York, and Watson was fine with him sitting despite being active.

"He had a sports hernia, a slight tear, so you know that's serious," Watson said. "That injury kind of ended my career, so I understand the seriousness of that injury."

Nuggets: C Jusuf Nurkic played for the first time in nine games. Nurkic missed the first 33 games after offseason surgery on his left knee, but his latest absence was a coach's decision. He had two points, two steals and three rebounds in four minutes.

Suns: At Golden State on Saturday.