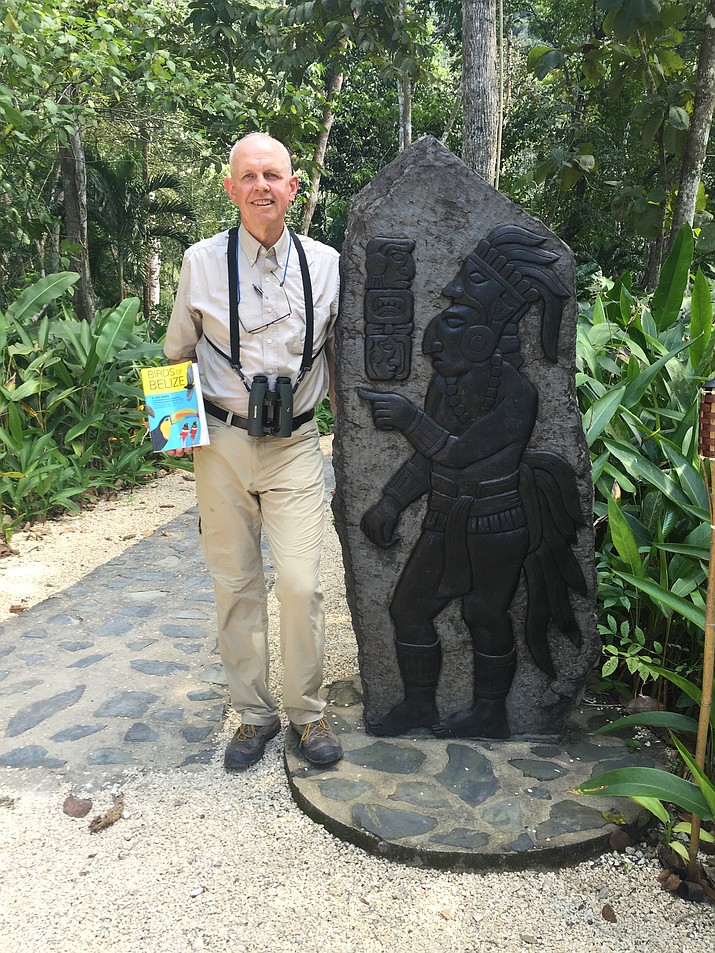 One of the more spectacular birding destinations we visited in Belize was a place called Black Rock Lodge. The setting was stunning! The lodge was in the jungle, situated above a river, with views of soaring limestone cliffs on the opposite side of the canyon. We had breakfast outdoors on an open deck and watched a variety of birds such as red-legged honeycreepers, yellow-throated and olive-backed euphonia and aracari feeding at fruit feeders.

After breakfast, we did a bird walk along the river, which yielded many life birds, including an ornate hawk-eagle, crimson-collared tanager, yellow-faced grassquit and white-whiskered puffbird. We also saw fifteen different warbler species for the day.

Later in the day, we took a hand-cranked ferry across a river – that was an interesting experience!–and visited Xunantunich, a Mayan archeological site. The ruins and birding were amazing, and we added rufous-tailed jacamar and golden-crowned warbler to our trip list. The thing that impressed me the most at this location were the howler monkeys. It is hard to describe the sounds they produce, and how it carries through the jungle.

One day we visited St. Herman’s Cave and the Blue Hole. On another day, we visited Rio Frio Cave, an enormous limestone cavern with a river running right through it – the size of the cavern dwarfed us! Ridgeway’s rough-winged swallows liked these limestone caves, and this was a new species for our trip.

On another day, we took a field trip to a region referred to as Mountain Pine Ridge, an open area with scattered Caribbean pine trees. We got great looks at ferruginous pygmy owl, green jay, black-faced grosbeak, and a new sparrow species for my life list—a rusty sparrow.

The last day of our trip, we spent the whole day in Guatemala. The plan was to visit the ancient city of Tikal and combine sightseeing and bird watching. The ruins were spectacular, and the habitat around Tikal was great for birding. Since Tikal is a national park, the area is not farmed or logged and there is no hunting. I imagine thousands of people visit Tikal every day, year in and year out. It occurred to me that the birds probably don’t have a lot of fear of people since there are so many tourists running around and since hunting is not allowed in the park.

We had some specific “target” birds that we wanted to see while at Tikal, one of them being the rare orange-breasted falcon. Fortunately, it liked to sit right out in the open on top of the temples, so we were able to get good looks at this species. A common, but not so friendly, bird at Tikal was an ocellated turkey.

I found myself being chased by one of these attack turkeys!

As we were wrapping up our day at Tikal, we came across an ant swarm. I am not sure if they were army ants or a different type of ant species, but it was fascinating to witness firsthand how wild birds react to the presence of an ant swarm. A mixed flock, with multiple bird species, gathered to snatch up the insects that were fleeing the advancing ants. We saw four different woodcreeper species all at the same time – northern barred, tawny-winged, ruddy and ivory-billed, as well as red-throated ant tanagers.

I am grateful for the opportunity I had to go bird watching in Belize. I saw over 270 different bird species, with approximately 150 of those being new for my life list!

Eric Moore is the owner of Jay’s Bird Barn, with two locations in northern Arizona – on Willow Creek Road in Prescott, and at 2360 State Highway 89A in Sedona. Eric has been an avid birder for over 50 years. If you have questions about wild birds that you would like discussed in future articles, email him at eric@jaysbirdbarn.com.