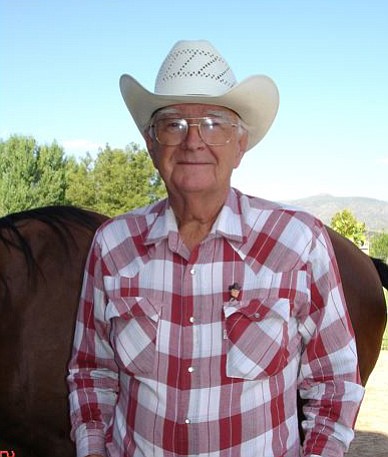 Carl Lee Mills, a resident of Prescott, Arizona, and formerly of San Jose, California, has peacefully passed away on Friday, March 4, 2016 at the age of 84. Carl was the son of Clyde and Myrl Mills of Pindall, Arkansas.

He was a veteran of the Korean Conflict for three years as an anti-aircraft gunner. After his military service, he became a successful Real Estate Broker in San Jose for over 32 years.

He was married in Mountain View, California on Aug. 9, 1953 to his wife, Coleen Cherie (Young) Mills.

Carl owned and piloted his private airplane. His other hobbies included, restoring a 1933 Hupmobile and other antique cars. He loved to cruise in his Bayliner and fish in the Monterey Bay. His travels included several continents. After retirement, Carl and Coleen moved to Camp Verde,

Arizona. In 2002, they purchased land and developed a beautiful ranch, which they named, “The Rocking M Ranch.” He loved his animals that included Appaloosa horses, sheep, cows, burros and llamas.

He was loved and will be missed by all his family and friends. Graveside services will be at 2 p.m. on Friday, March 11, 2016, at Oakhill Cemetery in San Jose. The family wishes any donations be made in Carl’s honor to the Alzheimer’s Association at www.alz.org or your charity of choice.