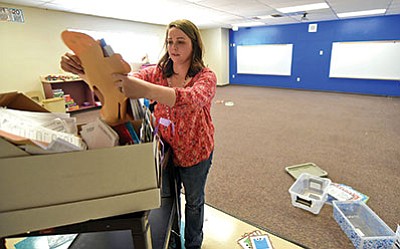 For weeks the kindergarten students in Kait Fletcher's class have been asking their teacher if today is the day.

"They're excited," Fletcher said. "They ask me every morning when they come in, 'Are we moving today?'"

On Monday, the first day back from spring break, the answer to that question will be yes. The kindergarten students at Territorial Early Education Center will be moving into their new classrooms.

The Chino Valley Unified School District Governing Board decided in December to shift student assignments for three of its schools starting next year. Moving kindergarten classes to rooms that were previously shuttered because of budget cuts is the first step.

Once they are settled in their new classrooms, their former rooms will then be renovated and prepared for preschool students starting next year. This year's kindergarten students will remain at Territorial next year, moving further down the hall for the first grade. If enrollment projections are correct, they will likely also stay at Territorial for the second grade.

For the past three years, students started the first grade at Del Rio Elementary School and Territorial was home for preschool and kindergarten students only.

Eventually, third through fifth grades are scheduled to take place at Del Rio and sixth through eighth grades will take place at Heritage Middle School before students move on to Chino Valley High School.

"We've been renovating those rooms, because they sat empty for three years," said Brandy Cox, the school's director.

Territorial's kindergarten teachers have been moving a little at a time to get ready for Monday.

"I'm going to try and get it all done before spring break, so I'm not here during spring break," said Patty Hust, one of the kindergarten teachers.

"[Superintendent Duane] Howard told us, don't worry, we'll help you with the move," Cox said. "He said he'd give each teacher 10 boxes. We all laughed, and told him kindergarten teachers have a lot more than will fit in 10 boxes."

John Scholl, the director of support services for CVUSD, said the district has spent about $15,000 so far getting those shuttered classrooms ready for students again. Most of the improvements are new carpeting and painting and furniture. In the past, the focus walls in each classroom was a different color. Now, they're all the same color: Cougar blue.

Cox said that similar to how most offices work in the business sector, when you have a need and you know there's a viable alternative going unused, you grab it. That's what happened with Territorial's shuttered classrooms the past three years. If a chair or desk broke, or you needed a whiteboard, there were plenty available that weren't being used.

By the time they started looking at the classrooms to see what shape they were in, they were mostly bare.

Cox said she found a great deal on classroom furniture in Phoenix, so she and her husband drove down and bought some at about 25 percent of what they would normally cost.

Some support services offices are currently using former Territorial classrooms and they will eventually have to move when the school begins teaching the second grade, said Scholl, who is scheduled to take over as superintendent of the district on July 1.

For next year, they will move to the future second grade classrooms and a temporary wall will be installed for security reasons, to keep the students and support staff separate. But what happens if after next year they need that space for second grade classes?

"We know that we will need to move the support services offices from Territorial but we do not have a solid plan in place yet," Scholl wrote in an email. "We have a year to figure that out and we have a few options, but are not ready to share those yet."