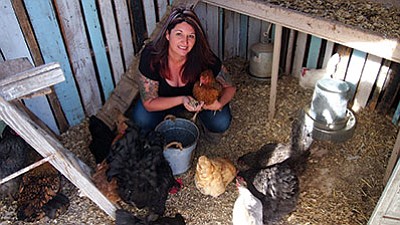 Amy Reid talked her husband into building her a chicken coop so she could have farm fresh eggs on a regular basis. (Courtesy photo)

History books claim chickens were domesticated more than 10,000 years ago in southwest Asia. The one-time jungle birds are now said to number more than 24 billion worldwide.

One of the advantages to living in a rural community is you can raise your own chickens.

Chino Valley resident Amy Reid wanted to be one of them, she just had to convince her husband to go along.

Amy and her husband, Jonathan, and their son Jacob moved here twelve years ago and bought some land.

"My dad used to bring us eggs from his chickens, and we noticed the difference in the taste of his homegrown eggs and the ones from the store," Amy Reid said.

"I told my husband this is what I want for Mother's Day, a chicken coop and chickens. He said 'No!' But I kept after him and he finally said yes and we built a coop, and started with seven chicks. I soon realized I wanted eggs sooner, so then I bought full grown hens. Eventually, we wanted to start eating healthier too. I wanted to know where the meat was raised and processed so we also bought meat chickens."

Reid said that between her chicks, her laying hens and meat chickens she now has approximately 200 chickens. She sells the chicks at various ages, eggs, and processed meat chickens.

"After a while we discussed it and decided to start raising ducks and quail also," she said.

Having a large garden Reid not only feeds her birds organic pellets but lots of veggies and herbs from her garden.

"This keeps the chickens healthy and makes them good laying hens. On average chickens lay an egg about every 26 hours," Reid said.

Reid said she enjoys working with her birds and also likes the fact that she is able to feed her family healthy food.

"Our big future project is to have a 'farm to table' store where local farmers, gardeners and crafters etc. can bring their goods to the store to sell to the community."