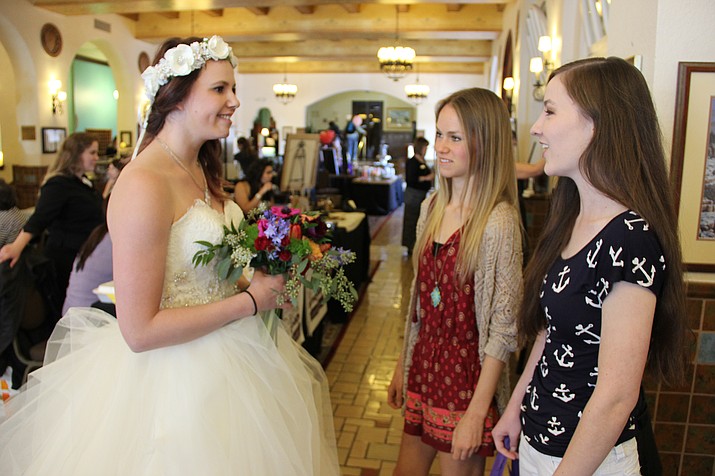 Emily McGrane, right, and Emily Bowen talk to Meagan Barker about the dress she’s modeling for Formally Yours, a Prescott-based bridal and formal wear boutique, at the 2016 Prescott Bridal Affaire Expo.

PRESCOTT - Soon-to-be-married couples glided past each other in a haze of nuptial splendor at the 2016 Prescott Bridal Affaire Expo on Sunday, March 6, hosted at the Hassayampa Inn.

No matter what they were looking for – a sterling musician, a minister, a venue, a photographer, a dress, a cake, etc. – they were sure to find it among the 67 exhibitors who participated.

“You name it, we’ve got it,” said Hazel Bowman, publisher of the area’s online wedding magazine, PrescottWeddings.com, and host of the event.

Such a one-stop shop is exactly what Wendy Windsor needed. Recently engaged, she has barely had time to fully realize what is going on and knows she has some serious planning to do.

“I need everything,” Windsor said with a hint of anxiety and excitement in her voice. “It’s a little overwhelming right now.”

Fortunately, she has a year and a half to figure it out.

Married once before in the most efficient way possible – in a courthouse – Windsor is ready to do it in the fashion she has always imagined: large and magnificent.

“Now it’s her time to be a young girl again,” said Janice Antes, Windsor’s mother. “She wants to fulfill that dream and I’m all for it.”

Kari Fischer and Mitch Macleod, an engaged couple from Phoenix, drove up to check out the expo as well.

They plan to get married on the Van Dickson Ranch in Skull Valley this coming October.

“We still need a DJ, a florist and a bartender,” Fischer said. “We don’t live up here, so [the expo] has been helpful because it makes it easier to know who works in this area.”

For local business owners, such as Terilyn Grover, who co-owns A Portrait Park by J, an in-studio and environmental portraiture photography company, the expo is a great opportunity to gain some additional exposure in the increasingly competitive wedding industry.

“You’ve got to be out in front of the public; especially nowadays with the younger crew and all the new photographers,” Grover said.

Not only was the annual event free, but it also featured raffle prizes every 30 minutes — some valued at $1,000 or more.

Bowman said she has already begun planning for next year’s expo, so if you’re getting married and you missed it this year, you may want to push your wedding back a year or so just to make sure you have everything you want or need for the special occasion.

For more information about the expo, such as a list of exhibitors, go to PrescottBridalAffaireExpo.com.

Along with PrescottWeddings.com, this year’s event was co-hosted by the Hassayampa Inn and sponsored by The Daily Courier, Prescott Woman Magazine, Lonesome Valley Newspaper, Magic 99.1 AM radio, Brooke Photography and Prescott Primrose Florist.