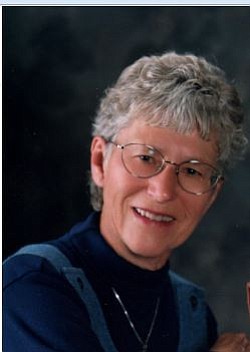 Ev graduated from Smithville High School in 1951. She began her college years in Kansas at Hesston College. She received her Bachelor of Science in Nursing from Goshen College in Indiana. Ev worked in Voluntary Service with the Mennonite Mission Board in Elkhart, Indiana, as well as at Rocky Mountain Camp in Colorado before beginning her career in nursing. Ev found her way to Prescott Community Hospital in 1966. In 1969, she followed her heart to Phoenix and became wife and mother when she married Alvin Cross, and his three small children. While taking on the role of motherhood, she continued to embrace her love for nursing. Evelyn’s love for Prescott brought the newly formed family to town in 1972. Ev retired from the Emergency Room at Yavapai Regional Medical Center in 1997 after serving for more than 30 years as a Registered Nurse.

Evelyn embraced healthy living! She enjoyed biking, hiking, camping, reading, cooking and hosting family gatherings. It was her faith in Jesus Christ that led her to believe that there was always

room for an extra person or two or five at her table. She was an accomplished cook, baker and seamstress. Her happiest moments were hiking and biking in the quiet stillness of God’s creation or making cookies, jams, jellies and pies with grandchildren.

She is survived by her husband of 46 years, Alvin Cross of Prescott; three children, David Cross (Monica) of Prescott, Barbara Cross Wilson (Joe) of San Marcos, California and Jennifer Cross Funke (Patrick) of Phoenix; and her most beloved grandchildren, Zane, Jessica, Nicole and Danielle Cross, Clayton and Jack Wilson, Quinn and Grady Funke.

Additionally, Evelyn is survived by three brothers, Mahlon Zuercher, Willie Zuercher, Herman Zuercher; two sisters, Ethel Zuercher Miller and Marilyn Zuercher Scotti; along with numerous nieces and nephews whom she loved dearly. She has been reunited with her sister, the late Frances Zuercher Moser, in heaven.

In lieu of flowers, the family is requesting that donations be made to Prescott Community Cupboard, 434 W. Gurley St., Prescott, AZ 86301.

There will be a Celebration of Life memorial service at 11 a.m. Saturday, March 19, 2016 at Trinity Presbyterian Church, 630 Park Ave., Prescott, Arizona.