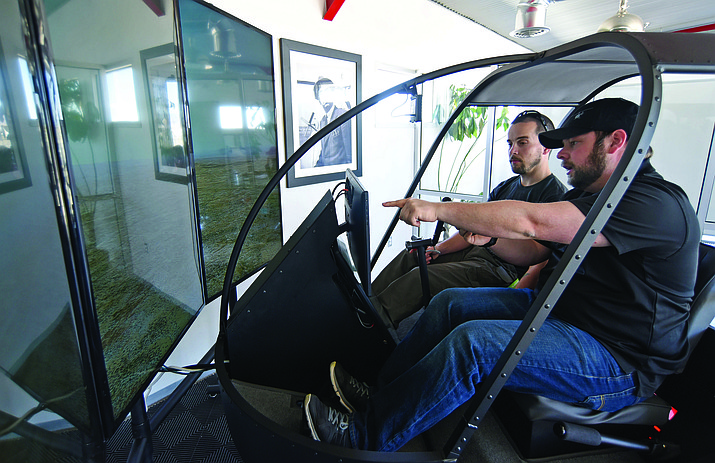 Using the new R44/R22 model X-Copter is nothing like playing an arcade video game at Chuck E. Cheese’s.

“You’ll get so focused in there that you’ll actually start believing that you’re moving,” said Zack Hardwick, Assistant Chief Pilot for Guidance Aviation.

The brand new flight simulator was unveiled at the Helicopter Association International Heli-Expo 2016 that took place in Louisville, Kentucky, earlier this month.

The piece of equipment — which retails for $98,750 — is manufactured by X-Copter in Prescott and is used by Guidance Aviation for its helicopter pilot training program.

Just like a real helicopter, it has pedals, a throttle, a cyclic (joystick), a collective lever, which changes the pitch angle of all the main rotor blades collectively, and all of the necessary gauges to determine speed, altitude and alignment.

Like the previous X-Copter model, the simulator can morph from replicating a Robinson R22 or R44 with only a software switch.

The major differences between the models are in visual effects and responsiveness, said Adam Pasquarella, Student Services Representative for Guidance Aviation.

“I can induce certain things as an instructor that you couldn’t otherwise do,” Pasquarella said.

One example being, Pasqarella will sometimes simulate an emergency.

“Such as, while someone is flying, I’ll cut their fuel off, and the simulator will create a physically realistic response,” Pasquarella said.

A user of the simulator can also pick any sort of flight conditions to practice in. One can even pick a specific day and time in any part of the world and an image of that area with the approximate weather conditions reported at that time will be generated.

Since X-Copter simulators are approved by the Federal Aviation Administration (FAA), students can count time spent in the simulator toward their 40-hour training minimum to get a pilot’s license.

Each student is able to use 12.5 hours of simulator time to replace the same number of hours in a real helicopter. This in turn reduces the cost of schooling for students.

At an average cost of $500 per hour of helicopter rental and instruction, students can save $6,250 or more, said Dave Roy, Guidance Aviation Communications Director.

“When students are introduced to flight theory in the classroom, learn maneuvers in the simulator, and then practice them in the helicopter, they can perfect their skills more effectively and efficiently — in a lower cost environment,” Roy said.

Hardwick believes the simulators are most useful for two reasons: building the appropriate muscle memory before ever having to step foot in a helicopter, and allowing students to start their hands-on education in a 100 percent controlled, safe and relaxed environment.

“The stress levels are kept down so the amounts of learning are actually elevated,” Hardwick said.

Guidance Aviation provides an open lab for anyone interested in potentially acquiring a helicopter’s license to test the simulators. The lab is open Monday through Friday and is located on the corner of Mac Curdy and Janine Drives near the Prescott airport.