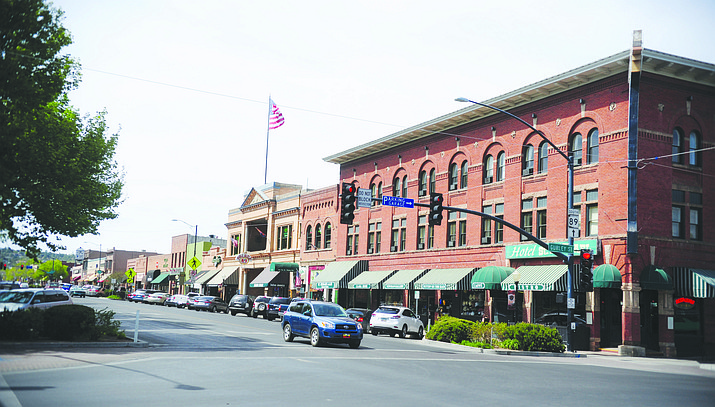 Businesses in Prescott and along Whiskey Row could be required to get a city business license. The issue most recently came before the City Council on March 1.

PRESCOTT – Details continued to be refined this week in the City of Prescott’s latest push toward implementation of a business license.

Although a final decision has yet to be made on whether to impose an annual license fee on businesses in the city, the Prescott City Council moved a step closer at its Tuesday, March 1 workshop discussion.

Up for discussion this week were questions on the specifics. For instance: Who would be exempt from the license? What information would be required on the application? And how much would the license cost?

Prescott Budget and Finance Director Mark Woodfill pointed out that the license is being proposed to apply to most businesses conducting business in the city, including those physically located outside of city limits that engage in business in the city.

That generated discussion about whether churches should be exempt. City Attorney Jon Paladini pointed out that most communities with business-license programs exempt churches, but require licenses for related church businesses, such as gift shops.

Likewise, thrift stores associated with churches or charitable organizations would also be required to have a license under the proposal.

The city also is proposing exempting “casual activities,” such as yard sales, sales of personal vehicles, part-time seasonal business activities by those under the age of 18, as well as sales of agricultural produce by residents.

Under the proposal, the city would charge $35 annually for the license, and would allow a one-year grace period for implementation.

A business would be required to provide information such as its name and physical location, contact information, start date and sales tax number, type of business, and the owners.

While a vote on implementation of a business license is not expected until May 3, a number of council members have now voiced support for the license.

Councilwoman Billie Orr, who was absent from the council’s earlier discussion, added her support this week.

In fact, Orr maintained that having a business license in place previously would have helped the city prevent its current situation with a proliferation of group recovery homes.

“I believe if we had a business license years ago, there are issues facing our city now that we wouldn’t have,” Orr said. Afterward, she added, “One of the biggest issues with sober living and group homes is that we didn’t know how many there were.”

Orr, who took office this past November, said that when she and other citizens asked about the numbers, the city was unable to respond with good numbers. “We really don’t have the data,” she said. “This is our responsibility.”

Councilman Greg Lazzell has been a vocal opponent of the business license, and he reiterated his concerns this week, questioning how the city would enforce the license.

“If you’re not getting a TPT (Transaction Privilege Tax) license, you’re not going to get this one,” Lazzell said, referring to the compliance by businesses required to charge sales tax.

Councilwoman Jean Wilcox – while allowing that “we’re not going to get everyone” – maintained that “it’s time for us to catch up.”

The city has considered implementing a license off and on for several decades, but never moved forward with the program.

A number of steps are still needed before the license would be implemented. Along with the workshops on Feb. 2 and March 1, another discussion is scheduled for April 5, when a draft ordinance will be introduced. Then, on May 3, the council is scheduled to consider adoption of the ordinance.

If approved, the license would become effective on June 2, and implementation would take place until Nov. 30. The registration would begin on Dec. 1.