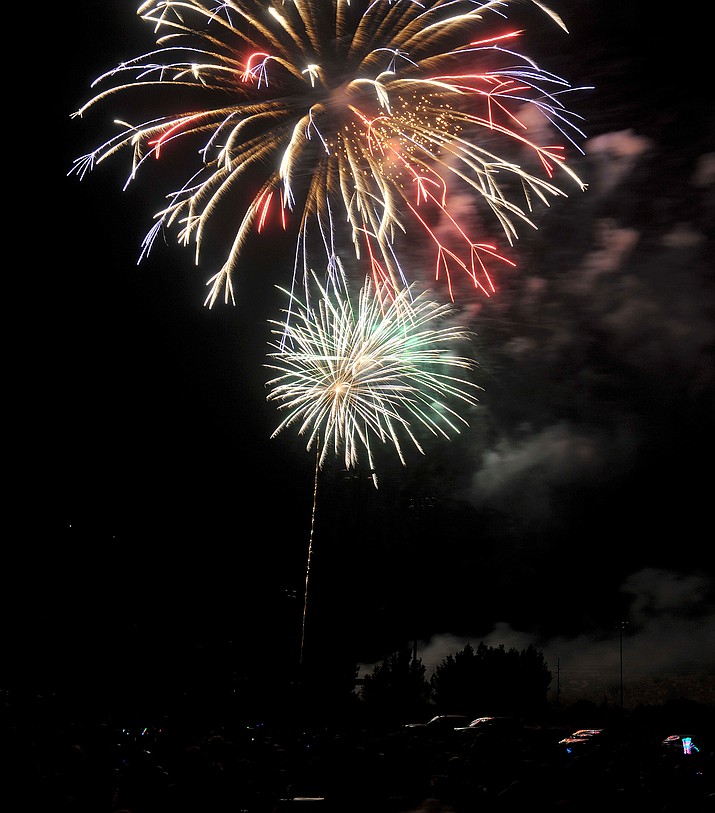 Add a downtown setting into the mix of live music, inflatables, craft beer, food vendors and fireworks, and organizers are predicting a winning combination for Prescott’s 2016 Fourth of July celebration.

The event is scheduled from noon to 9 p.m., Monday, July 4, at the Prescott Mile High Middle School, 300 S. Granite St.

The fireworks – scheduled to start at 9 p.m. – will launch just across the street, from the top floor of the downtown parking garage on Granite Street.

The downtown locale is new this year, after more than a decade of July 4 fireworks celebrations at Pioneer Park in northeast Prescott.

For this year’s event, the center of activity will be the Prescott Mile High Middle School’s football field, where organizers say a cadre of food trucks, a beer and margarita garden, bands, inflatables, and water slides will be entertaining the crowd.

General admission is $5 (4 and younger are free), and a kids’ pass for unlimited use of the inflatables is $10.

Organizer Steve Gottlieb of Eagle Management and Events, LLC says the new downtown component will offer a number of bonuses for attendees, downtown businesses, and the City of Prescott.

While those who attend will be in the midst of a vibrant downtown atmosphere, Gottlieb said, the downtown restaurants and bars also will benefit from all of the traffic – as will the city’s sales tax receipts.

“Last year on July 4, the downtown was anything but vibrant,” Gottlieb said, pointing out that the popular Pioneer Park event regularly drew thousands out of the city’s center.

As a result of more than $1 million in budget cuts this past January, the city eliminated its special events manager position, and transferred the division to the recreation services department. Without the staff to continue the massive Pioneer Park event, recreation services solicited proposals from private companies, and Eagle Management and Events, LLC had the winning proposal.

That process delayed the event planning somewhat, and Gottlieb said he was strapped for both time and money. “I had 90 days and $20,000 to put on the fireworks downtown,” he said this past week, adding, “It used to be an $80,000 city event,” with nearly a year of prior planning.

Still, Gottlieb says this year’s fireworks display is scheduled to run for 15 minutes – longer, larger, and fuller than the display people are accustomed to for the downtown New Year’s Eve Boot Drop, which also launches from the parking garage. He added: “The finale is going to be huge.”

The event will feature nine food trucks offering everything from burgers to BBQ to Greek food to samosas, as well as beer and margarita vendors. (Coolers, canopies, outside liquids, and outside food will not be allowed. Only sealed and unopened water bottles will be allowed. Animals also will not be allowed.).

For entertainment, 13 inflatables and water slides will be on hand, as will four bands, and a mechanical bull.

More detail about the food vendors, band schedule, and activities and games is available online at: http://prescottevents.net/prescott-downtown-fireworks/