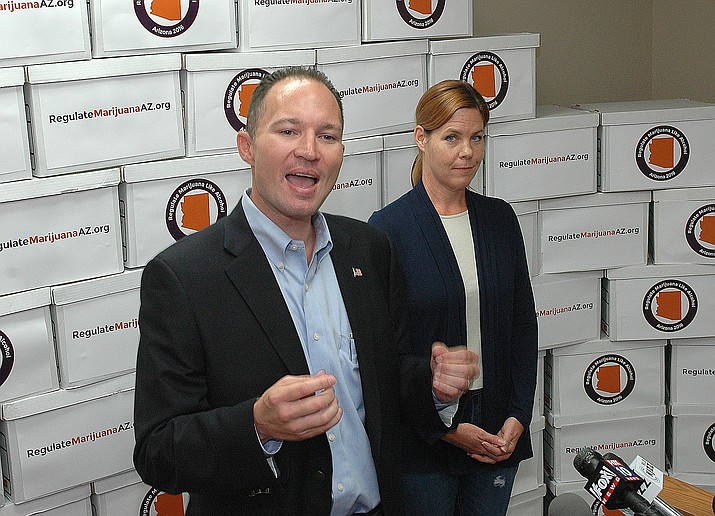 J.P. Holyoak, who chairs the effort to legalize recreational use of marijuana, discusses the drive that resulted in petitions with more than 250,000 signatures to put the issue to voters in November. With him is Kathy Inman, who chairs MomForce AZ - a supporter of the measure.

PHOENIX - The campaign to allow recreational use of marijuana is on, amid questions of whether the measure would allow people to legally drive while under the influence of the drug.

Supporters on Thursday, June 30, submitted what they said were petitions with 258,582 signatures seeking to change the law. That is more than 100,000 more than the Secretary of State's office needs to declare valid to put the issue on the November ballot.

But amid the nearly 10,000-word proposal is language saying that individuals cannot be penalized solely because they test positive for not just marijuana metabolites that are left over weeks after using the drug but the actual "components of marijuana." And that would include tetrahydrocannabinol (THC), the psychoactive element of the drug.

Despite that, attorney Ryan Hurley, who represents the Campaign to Regulate Marijuana Like Alcohol, insisted this would not permit drugged driving. He pointed out that the measure also says the law would not immunize someone from being charged with operating a motor vehicle "while impaired by marijuana or a marijuana product."

But Hurley acknowledged that there is nothing in the proposal to define what level of marijuana makes someone "impaired."

He said the legislature could enact a specific standard at which someone is presumed impaired.

That's the situation with alcohol, where a blood-alcohol content of 0.08 is considered a "per se limit," which allows a court, absent any other evidence, to conclude someone was driving while impaired.

"No they can't," countered Maricopa County Attorney Bill Montgomery, a foe of legalized recreational marijuana. He said the language of the ballot measure itself precludes that.

"It says you can't be penalized solely on the basis of the presence of the metabolites or marijuana," he said.

"A per se limit does exactly that," Montgomery said. "It says if you have this much THC (in) nanograms per milliliter or over (in your blood), you are impaired."

And there's something else: Even if lawmakers would approve a presumptive limit, the actual number could be challenged by supporters of marijuana use as arbitrary.

In Colorado, which legalized recreational use of the drug, the law says drivers with five nanograms of active THC in their blood can be prosecuted for driving under the influence of drugs.

"However, no matter the level of THC, law enforcement officers base arrests on observed impairment," according to the Colorado Department of Transportation.

Much of the debate that will play out between now and the November election will be on the pros and cons of legalized recreational use of the drug. That will include debate over whether marijuana is better or worse than alcohol which, like marijuana would be if this measure is approved, is legal for adults.

But there's another issue that is likely to generate some opposition.

The measure would limit the number of places where marijuana could legally be sold to something in the 150 range, at least until 2020. That is based on a prohibition capping dispensaries at no more than 10 percent of the number of places that can sell alcohol for off-premises consumption.

Potentially more significant, the initiative gives first preference for these limited number of licenses to the owners of the 99 medical marijuana dispensaries already in operation. And more than a dozen of the five-figure donations that have come in to put the measure on the ballot are from these dispensaries.

But J.P. Holyoak, who chairs the initiative campaign, said this is not any sort of restraint of trade.

"This is in no way, shape or form an oligarchy or a cartel," he said.

"Do we want marijuana stores or dispensaries on every other corner?" he said. "Or is this something that should remain in a taxed, regulated and limited basis so that it's not on every other street corner?"

By comparison, the website Potguide.com lists about 170 dispensaries in Denver, though it says 71 of these sell only to medical marijuana patients. Holyoak said initiative organizers here believe that's too much and that 150 for the entire state is sufficient, at least for the time being.

"I think marijuana should be available and accessible for adults who want it," he said. "But it should not be shoved in our faces like we've seen in Denver."

Holyoak denied that the limits, which could result in some areas having only one dispensary within driving distance, would result in consumers paying more because of the lack of competition. He said there already is "extreme competition" now among the fewer than 100 medical marijuana dispensaries.

And Holyoak said if lack of competition drove prices up, the new Department of Marijuana Licenses and Control that the initiative would establish has the ability to issue new licenses - but not until 2020.

Holyoak said campaign donations are coming from beyond the existing dispensaries. He said there is backing from the construction industry, which sees the new stores as a business opportunity, as well as the tourism community, which believes that legal marijuana will result in more visitors from other states.

But a report prepared by Patrick Moran of the Joint Legislative Budget Committee suggests the effects of marijuana tourism would be limited here.

He said there are estimates that anywhere between 2 and 4 percent of marijuana sales in Colorado are made to out-of-state residents. But Moran said Arizona should not expect anything like that, as it would be competing for those same tourists.

Proponents also claim that legalizing marijuana by adults will not result in more illegal use by teens. That is backed by a recent report by the Colorado Health Department, which found that the trend for current and lifetime marijuana use among high schoolers there has remained "stable" since 2005.

Kathy Inman, executive director of MomForce AZ, did not dispute that more adults using recreational marijuana could mean more access to the drug by children, much in the same way that teens can drink their parents' liquor.

But Inman, whose group is focused on preventing abuse of other illegal drugs and legal prescription drugs, said she's not concerned. And she derided anti-initiative measures that said young children will overdose from their parents' edibles.