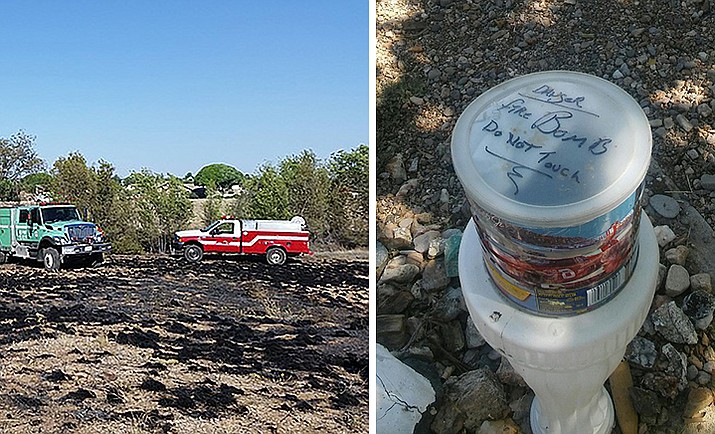 Cyndi Thomas, the senior services administrator at the Chino Valley Senior Center, said it was baptism by fire, though she quickly added, “that’s not a good term.”

“I’ve been here for 11 years and this is our first time ever having to be an evacuation center,” Thomas said on Friday.

For 11 years, the Senior Center wasn’t needed as an evacuation center. That change last week when it was needed twice, on back-to-back days.

On Wednesday, June 22 a fast-moving 10.6-acre brush fire forced about 25 Chino Valley residents to seek shelter. The call originated from the 800 block of South Quain Drive. Fire crews saw the wind moving the fire toward 16 homes and ordered the evacuations.

The fire was controlled quickly with no damage to homes, but a police officer and two fire fighters sustained minor injuries and had to be treated.

Central Arizona Fire & Medical Authority Chief Scott Freitag said Tuesday that the fire was caused by backyard grill. He warned residents that some embers continue to burn for up to 24 hours inside the ashes and that they should make certain all embers are out after grilling.

Before town officials could evaluate their first evacuation, they were doing it again. At about 3:45 p.m. on Thursday, June 23 a worker at a home noticed a device that he thought might be an explosive. He called police, and they looked at it. They agreed, it might be dangerous. So police officers went to the neighbor homes and suggested they evacuate.

“They just knocked on the door and said they’re evacuating the neighborhood,” said Frank Mello, one of the neighbors who took refuge in the Senior Center. “I almost fell on the floor. They said there’s a possible bomb threat up the road, a couple of houses away from here. So here I am with the rest of my neighbors.”

Chino Valley Police called in the Arizona Department of Public Safety, which sent three bomb squad trucks. They looked at the device, and weren’t quite sure what to make of it. They decided it was safe for transport and they were planning on taking it to the police department’s shooting range at Old Home Manor and detonating there.

“We were able to track down the owner [of the house where the device was found] …” said Lt. Vincent Schaan of the Chino Valley Police Department. “Her description of the device and what’s in it matches what the bomb squad thinks is in it. It’s an antique 1930s fire suppressant system that had a glass cylinder that’s been refilled with color water.”

After further tests, Schaan said bomb experts decided it was not dangerous and did not detonate it, returning it to the home.

Only about eight neighbors were at the Senior Center during Thursday’s evacuation.

Thomas said the building is a great location to evacuate people to in cases of emergencies.

“We’re here more for the respite, the cool, it’s hot outside,” Thomas said. “We have some refreshing drinks, some food. We can prepare a meal if we needed to.”

Thomas added that if they could handle people staying overnight if needed, though she suspects if it goes that far the Red Cross would get involved.

Schaan said that it appears the back-to-back evacuations to the Senior Center worked very well.

“Giving people a place to go, especially because we’ve had some record-breaking heat the past week … getting them some liquid, some water so they can stay comfortable while we deal with the house,” Schaan said.

Since the town hasn’t had a situation like this before, Schaan said officials would look at how things went.

“There’s always kinks,” Schaan said. “No two incidents, even fires, are the same. We do get better every time we do this and we do talk to each other to improve each other’s responses.”

Freitag said that they plan to take a look at the evacuation plans they have in place and how they worked last week and will make adjustments as needed.