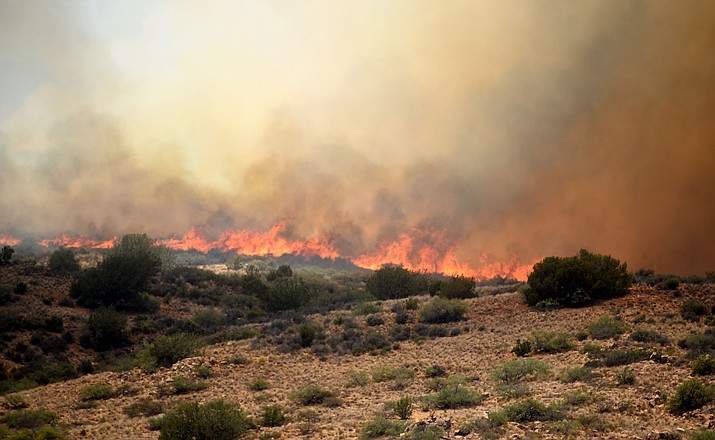 A wildfire is threatening structures near Cordes Lakes Tuesday, June 28, around 12:30 p.m.

A slurry bomber is on the scene at the Tuesday, June 28, fire near Cordes Junction.

CORDES LAKES – A brush fire burning near mile post 262 on Interstate-17 has forced the closure of I-17 in both directions. Highway 69 Southbound in Mayer is also shutdown.

3:00 p.m.: Interstate 17 is closed again at Highway 69. Department of Public Safety officials suggest an alternate routes on state highways 87 and 260 through Payson.

Another alternate route between Prescott and Phoenix is Highway 89 through Yarnell.

CLOSED: SB I-17 has closed again at SR 69 because of heavy smoke from the wildfire.

According to Bureau of Land Management spokeswoman Dolores Garcia, fire managers request the public's assistance to avoid travel in the area so emergency fire resources can access the fire.

Resources on the fire include multiple engines, helicopters and multiple air tankers from the BLM, Arizona State Forestry, and multiple community fire departments.

#BugCreekFire Resources on scene on the ground and in the air are making good progress. Photos by @azstateforestry pic.twitter.com/B1eLNuzxrZ

UPDATE: I-17 at Cordes Jct. has reopened. NB still closed for a wildfire at milepost 263.

Southbound motorists can use I-17 south to Highway 260 at Camp Verde, east to Highway 87 and south on Highway 87 to the Phoenix area.

CLOSURE: I-17 NB/SB is closed at Cordes Jct. for a wildfire . No estimate on when the road will reopen. pic.twitter.com/NIvvE2ctXT

More info as it becomes available.

Propane truck fire closes both directions of I-17 near Black Canyon City
Update: I-17 is now open; wildfire under control
Update: Interstate 17 is open in both directions after fire
Update: Left lane of I-17 northbound reopens near Camp Verde after FedEx truck accident
Update: I-17 delays clear near Sunset Point