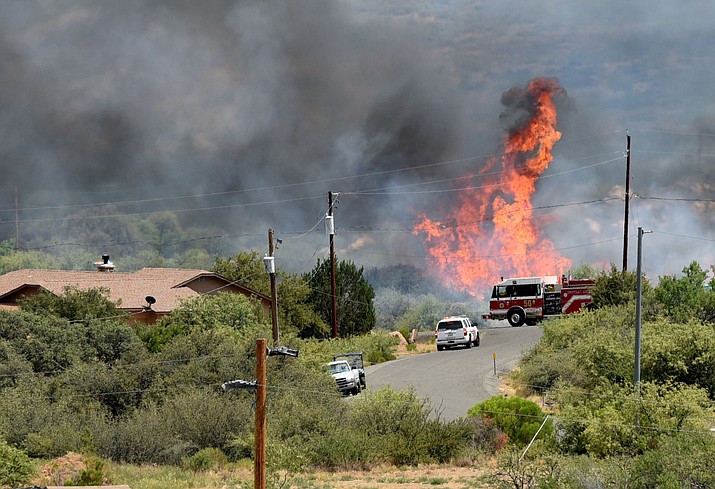 Brush burns near a home on the Bug Creek Fire near Cordes Lakes Tuesday afternoon, June 28.

A heavy air tanker drops a load of slurry on the Bug Creek Fire on Tuesday afternoon, June 28, 2016.

CORDES LAKES – The Bug Creek Fire, which was reported at 10:45 a.m. Tuesday, June 28, along Interstate 17 and Cordes Junction, grew to 1,000 acres by nightfall despite numerous firefighting resources being poured into the scene.

Evacuations of 10 to 15 homes were mandated as the fire rapidly encroached on residential areas, and the Red Cross set up a shelter for evacuees at Mayer High School. Few, if any, people used it, preferring to wait in the parking lot of a nearby McDonald’s, a spot from which they could see some of the homes that were in danger.

For a time, I-17 was closed in both directions due to the smoke and flames; when it was re-opened, it was in one direction only, southbound. The northbound side, which was closer to the fire, was re-opened briefly but shut down again.

“The only thing I can figure is, a bouncing chain,” that could have caused sparks, he said, “or somebody flicking a cigarette,” a move he called “dumber than a box of rocks.”

Officially, the cause is under investigation. Bureau of Land Management spokesperson Dolores Garcia said Tuesday evening containment estimates were unavailable.

As the wind-whipped fire grew past 100 acres and began climbing ridges around this small town, residents found themselves with very little time to get out.

Many took nothing more than what they could lay their hands on, including pets.

As they gathered at the McDonald’s, watching helicopters fill water buckets from a portable tank nearby, they swapped stories.

The flames “were right in front of my house,” said Sheila O’Dea.

“From here to that bush,” she continued, gesturing to a shrub about 100 feet away. “We didn’t have a chance to get anything out. It’s scary. How do you prepare for something like this?”

James, who did not want to give his last name, had just relocated to Cordes three months ago from Phoenix. He stood on the hood of his truck, using binoculars trying to get a glimpse of his house or at least an idea of where the fire was going.

“The flames are really, really bad and they’re right next to the houses,” Deborah Chandler said. “There’s a lot more houses before mine … I don’t know. It’s really bad.”

At times, flames began to crest a small ridge near the fire command post, right next to the McDonald’s, but the wind direction changed and kept the fire from advancing. The change may have been the deciding factor that put the fire down, Thurman theorized. He was on the fire line when it happened.

“(Firefighters) protected a couple structures that were right next the fire,” he added. “The slurry bombers, especially the jet, were unbelievable to see.”

“I watched the smoke, and then I saw the line of fire come over that hill,” Kelly Marquardt said, and she knew it was time to leave, even before Yavapai County Sheriff’s deputies came by to warn her.

“This is the first time” in five years of living here that she had to evacuate for a fire.

But she seemed fairly confident that the fire crews would save the homes.

“They’re doing a good job,” she said. “They’re working hard to get it under control.”

According to the forest’s incident website, concerns remain “thunderstorm development and outflow winds.”

Watch The Daily Courier and dCourier.com for updates as details are made available.