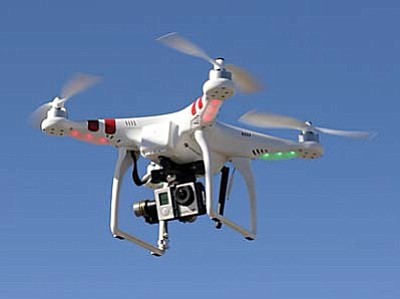 The rules, known as Part 107, take effect in August, and regulate the use of drones under 55 pounds that are not being flown for recreational purposes.

Before the rules were written, UAS were to be used only by hobbyists not being paid for their flights unless the operators obtained a waiver from the FAA.

Sarah Nilsson, assistant professor of law at Embry-Riddle Aeronautical University, said the school’s UAS program, which has been in existence for several years, will benefit from the new rules.

“In the past, we’ve had our hands kind of tied, because of how much we can practice outside with our students,” she said. But “now they’ll be able to do a whole lot more than just under the ‘hobby’ rules.”

Part 107 represents a leap forward in the development of commercial use of unmanned aircraft.

“UAS are going to be replacing all kinds of manned aircraft and doing things manned aircraft never did in the first place,” Yavapai College Associate Professor of Aviation Matt Mintzmyer said. “The industry is pretty wide open. Students will have job opportunities and be able to go out in the industry, or create their own business from the ground up.”

The FAA quoted industry estimates that the new rules could generate more than $82 billion for the U.S. economy and create more than 100,000 new jobs over the next 10 years.

“Whether it is aiding search and rescue missions, advancing scientific research, responding to natural disasters or helping farmers care for their crops, UAS are capable of saving time, saving money and most importantly saving lives,” a news release from the Association for Unmanned Vehicle Systems International said.

With an eye toward capitalizing on that new sector, Yavapai College launched a new UAS program in the spring.

“We train on everything you need to know for the operator certificate,” including building and operating drones, operational safety, rules and regulations and entrepreneurship, Mintzmyer said.

Part 107 mandates a certificate, or license, for commercial drone pilots. Nilsson said that would mean completing an online course for current airplane or helicopter pilots, and those who are unlicensed would have to take a course and a test at an FAA testing center.

And while some may grumble at the $150-$200 cost to get a license to fly a quadcopter that they can buy at a Wal-mart for a commercial use, Nilsson said it was important.

“You have to educate people who have never been pilots before … on the structure of the airspace, how the airspace works, interacting with airports and planes, and people to keep everybody safe,” she said. “I think it’s necessary.”

Here is a summary of the FAA’s new Part 107 rules for commercial use of UAS:

• Visual line-of-sight (VLOS) only; the unmanned aircraft must remain within VLOS of the person manipulating the flight controls.

• Small unmanned aircraft may not operate over any persons not directly participating in the operation, not under a covered structure, and not inside a covered stationary vehicle.

• Must yield right of way to other aircraft.

• Maximum altitude of 400 feet above ground level (AGL) or, if higher than 400 feet AGL, remain within 400 feet of a structure.

• No operations from a moving vehicle unless the operation is over a sparsely populated area.

• No careless or reckless operations.

• No carriage of hazardous materials.

Source: FAA. This list is not comprehensive and UAS users must check official sources.