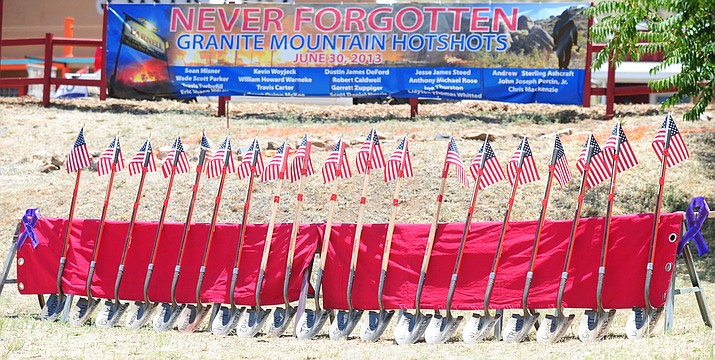 Flag-topped shovels with the names of the Granite Mountain Hotshots on the blades were part of the 2015 remembrance ceremony in Yarnell.

Despite suffering a major setback with the recent Tenderfoot Fire, the community of Yarnell is still planning to conduct a memorial service next week to commemorate the 2013 Yarnell Hill Fire.

• There is no formal ceremony in Prescott. However, flags will fly at half-staff Thursday, with a moment of silence at 4:42 p.m., following 19 tolls of the courthouse bell.

The memorial will take place at the Yarnell Hill Fire Memorial Park at 4 p.m., Thursday, June 30 – the three-year mark of the devastating 2013 Yarnell Hill Fire, during which 19 Granite Mountain Hotshots died, and 127 Yarnell-area homes were destroyed.

The memorial will come just weeks after about 350 residents of Yarnell were evacuated from their homes for another wildfire – the Tenderfoot Fire – which burned about 4,090 acres in and around Yarnell.

“We believe that the Hotshots really saved our community twice,” Lechner said, noting that the preparations that were started after the Yarnell Hill Fire were central to preventing the loss of homes in the Tenderfoot Fire.

A news release from the recovery organization states: “In the wake of the recent Tenderfoot Fire in Yarnell and Peeples Valley, this year’s memorial event of the Yarnell Hill Fire of 2013 is expected to be particularly poignant.”

The memorial will include brief comments from firefighting personnel, residents and the family of one of the fallen Hotshots. Several local musicians will perform. The service will conclude with the reading of the names of each fallen member of the Granite Mountain Interagency Hotshot crew, and a moment of silence at 4:42 p.m. – the official time of the Hotshots’ passing.

The event also would allow attendees to see the latest developments in the Memorial Park, which is still under construction. “It will look like a construction site, but it still is the appropriate spot for the memorial,” Lechner said.

The Yarnell Hill Fire Memorial Park is located at 22556 S. Highway 89, Yarnell (Shrine and 89). Organizers are asking attendees to bring chairs; shade covers will be provided. Parking on either side of Highway 89 is advised.

Meanwhile, in Prescott, flags will fly at half-staff on Thursday, June 30, in honor of the Hotshots. The city also will observe silence at 4:42 p.m., followed by 19 tolls of the Yavapai County Courthouse bell. The day of remembrance will not include a formal ceremony in Prescott.