Who started Tenderfoot Fire?
Cash reward offered if your tip leads to arrest 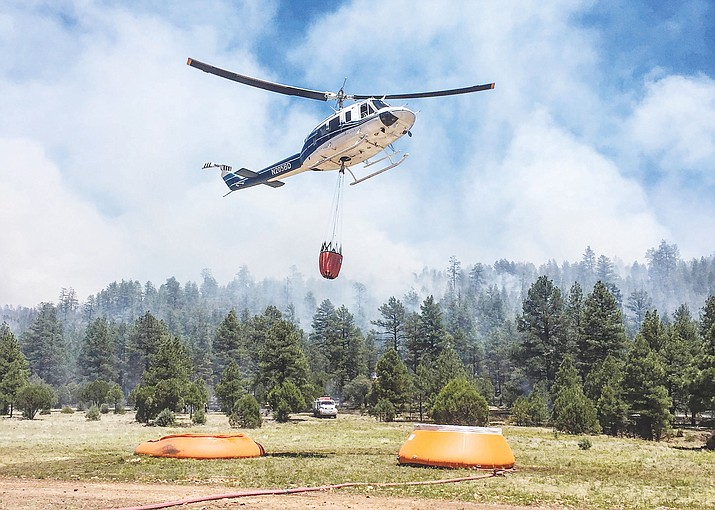 A helicopter reloads for another drop on the Cedar Fire, burning southwest of Show Low and Pinetop-Lakeside, Arizona. Of the 29 wildfires currently burning in the state, the Cedar Fire is the largest at more than 45,000 acres. It is 24 percent contained.

PRESCOTT – Yavapai Silent Witness is offering a cash reward for information leading to the arrest of the person or persons responsible for causing the Tenderfoot Fire that burned over 4,000 acres and endangered the town of Yarnell earlier this month.

Because the usual “natural” cause, lightning, has been ruled out, authorities believe it was set by someone, either intentionally or accidentally.

“The Tenderfoot Fire the fire destroyed four outbuildings and two microwave towers on a nearby hill and endangered the town of Yarnell earlier this month,” Silent Witness Program Director Steve Skurja said.

“A few days before this fire other small fires were detected and extinguished near the Stanton Road which is also southeast of Yarnell,” he added.

Skurja said the amount of the reward has yet to be determined.

He encouraged anyone who has any information about the fires or saw anything suspicious in the area around June 8 to call.

Callers to Silent Witness at 1-800-932-3232 do not have to give their names and are paid the reward if their tip turns out to lead to an arrest.

There are 29 wildland fires currently burning in Arizona. Following is a list of the largest (1,000 acres or larger):

Burning southwest of Show Low and Pinetop-Lakeside, east of Highway 60 on the Fort Apache Indian Reservation, it is at 45,176 acres and 24 percent containment.

The Jack Fire is located about 14 miles north of Clints Well on the east side of Lake Mary Road, along Forest Roads 294 and 294C, on the Mogollon Rim Ranger District. Caused by lightning, it’s at 33,850 acres and 30 percent containment.

It’s 18 miles north of Sasabe, in the Baboquivari Mountains and is at 15,350 acres with 80 percent containment. It is human-caused and still under investigation.

Burning south of Ruby, near Montana Peak, Tumacacori Mountains, it is at 8,522 acres, 85 percent containment. It is human-caused and still under investigation.

In the Cumero Mountains, this fire is at 5,500 acres and is 90 percent contained. It is human-caused and still under investigation.

Burning west of Walker Canyon just north of the Mexico border, it’s at 4,929 acres and 90 percent contained. Started in Mexico.

Located south of Highway 89A, in the vicinity of Saddle Mountain Wilderness, this lightning-caused fire is at 1,502 acres and 70 percent contained.

The remaining 19 fires, as of Thursday evening, range from minimal sizes to 900 acres. Half are listed as zero percent contained, with others nearly 90 percent or fully contained, according to the Forest Service’s Incident Information website.