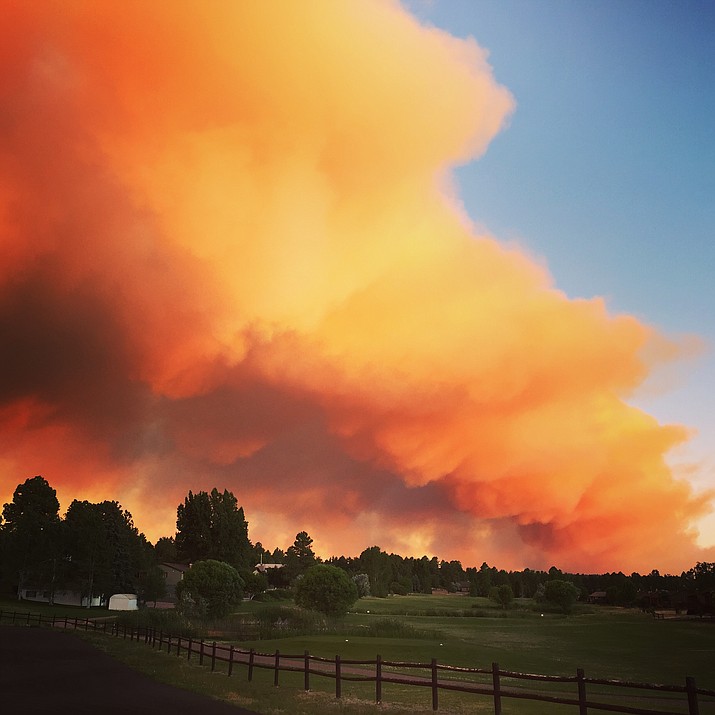 In this photo taken June 15, the day the blaze started, plumes of smoke are visible above a golf course in Show Low. This fire has expanded over the week to cover 26,739 acres and is at 40 percent containment.

There are 26 wildland fires currently burning in Arizona. Here’s a list of the largest:

Burning southwest of Show Low and Pinetop-Lakeside, East of Highway 60 on the Fort Apache Indian Reservation, it is at 26,739 acres and 40 percent containment. Navopache Electric Cooperative has de-energized the power lines to Cibecue, Cedar Creek and Carrizo. The interruption of power is necessary to protect firefighters while they conduct burnout operations near the power lines.

The fire grew approximately 14,000 acres Sunday, with all growth extending from the south side of the main fire. As of Monday morning, resources include 23 fire crews, 37 engines, seven bulldozers, 11 water tenders, seven helicopters, four Single Engine Air Tankers (SEATs) for a total of 770 personnel assigned to the incident.

The Jack Fire is located approximately 14 miles north of Clints Well on the east side of Lake Mary Road, along Forest Roads 294 and 294C, on the Mogollon Rim Ranger District. Caused by lightning, it’s at 33,850 acres and 40 percent containment.

Burning south of Ruby, near Montana Peak, Tumacacori Mountains, it is at 8,522 acres, 85 percent containment. It is human-caused and still under investigation.

It’s 18 miles north of Sasabe, in the Baboquivari Mountains and is currently estimated at 8,107 acres with 15 percent containment. It is human-caused and still under investigation.

Located in the Cumero Mountains in the Coronado National Forest, this fire is at 5,500 acres and is 90 percent contained. It is human-caused and still under investigation.

Burning west of Walker Canyon just north of the Mexico border, it’s at 4,929 acres and 90 percent contained. Started in Mexico.

Caused by lightning, it’s about 10 miles southwest of Valle, has burned 4,395 acres, and is 30 percent contained.

It is burning between Vernon and Eagar, is at 2,285 acres, 60 percent containment, and was human-caused by a hot car axle.

Located south of Highway 89A, southwest of Forest Roads 8910 and 211 within the vicinity of Saddle Mountain Wilderness, this lightning-caused fire is at 1,502 acres and 55 percent contained.