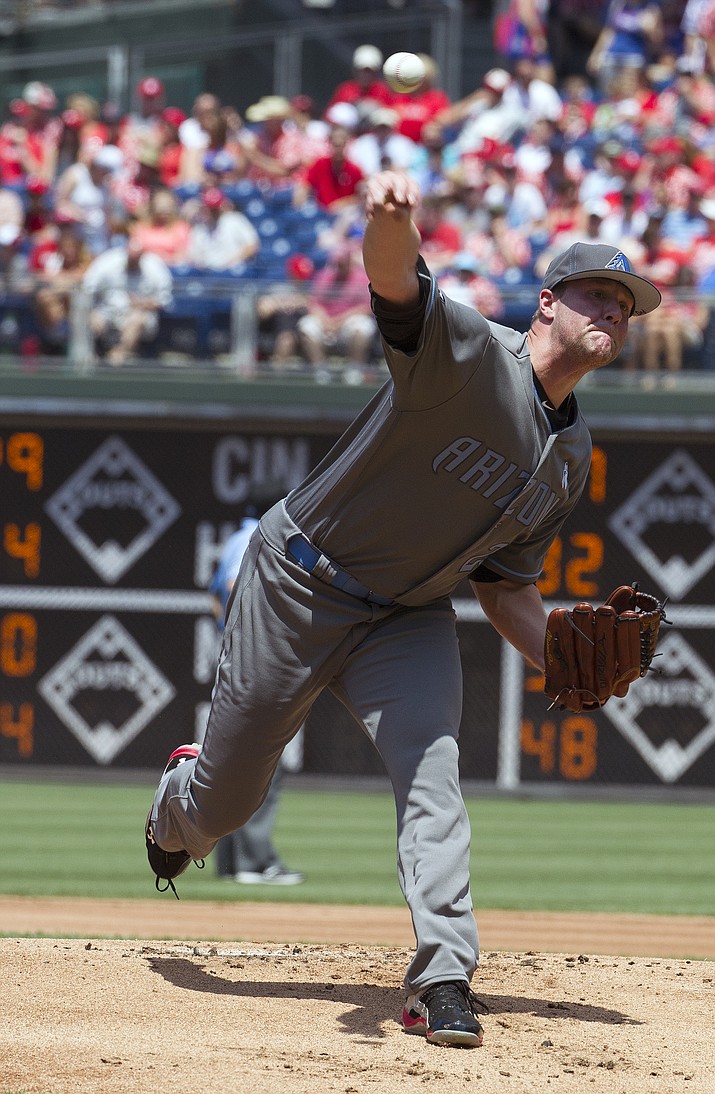 Arizona Diamondbacks’ Archie Bradley throws during the first inning of a baseball game against the Philadelphia Phillies, Sunday, June 19, 2016, in Philadelphia.

PHILADELPHIA (AP) — Archie Bradley got back on track by working on his mental approach.

Bradley pitched six strong innings and drove in a run, leading the Arizona Diamondbacks to a 5-1 victory over the Philadelphia Phillies on Sunday.

Bradley (3-3) allowed an unearned run and three hits, snapping a personal three-game losing streak. He pitched out of a bases-loaded, no-out jam in the sixth.

The right-hander said he didn’t let go of a fifth-inning homer by Dodgers slugger Joc Pederson in his last start, hurting his performance.

“Today I told myself, good or bad, I’m going to get on the mound and work pitch to pitch,” he said. “And I did that.”

It worked out in a big way with Arizona leading 2-0 in the sixth.

A walk to Andres Blanco, Jimmy Paredes’ single and shortstop Nick Ahmed’s error loaded the bases. But Bradley got Tommy Joseph to ground into a 4-6-3 double play before Cody Asche lined out to center, keeping Arizona ahead 2-1.

“I knew I just had to make a quality pitch. I did exactly what I wanted to do, minimize the damage,” he said.

Jake Lamb had two hits and two RBIs for Arizona, which has won six of eight and will try for a sweep of the four-game series on Monday. Michael Bourn drove in a run, and Paul Goldschmidt singled to extend his major league-leading hitting streak to 13 games.

“The guys are really bearing down and playing,” manager Chip Hale said. “We’re getting good starting pitching. The hitters are comfortable. Everything is clicking right now.”

Philadelphia managed just three hits while dropping its sixth straight game and 23rd in the last 29. The Phillies, who entered with the fewest runs in the majors, have averaged just 1.8 runs during their skid.

“Once again, three hits, that’s our issue,” Phillies manager Pete Mackanin said. “I don’t remember seeing anything like this. We’re snake-bit and it’s hard to crawl out. We need more discipline at-bats and we have to be more selective. We need more professional at-bats.”

The Diamondbacks tacked on a run in the seventh on Bourn’s single to center off David Hernandez, and made it 4-1 in the ninth when Phil Gosselin scored on Andrew Bailey’s wild pitch. Lamb added a run-scoring triple.

Bradley helped his own cause in the third when he drove in Brandon Drury with a sacrifice fly to center off Zach Eflin (0-2). Lamb made it 2-0 in the sixth with an RBI double to left-center.

Eflin rebounded nicely from a shaky major league debut on Tuesday in Toronto, where he allowed eight earned runs and nine hits in 2 2/3 innings. The 22-year-old right-hander yielded two runs and four hits in 5 2/3 innings against Arizona, lowering his ERA from 27.00 to 10.80.

Philadelphia’s Maikel Franco went 0 for 4, grounding out to end the game, and is hitless in his last 16 at-bats.

Diamondbacks: RHP Shelby Miller will be activated from the disabled list to start Monday’s game. Miller has been sidelined since May 27 with a right index finger sprain.