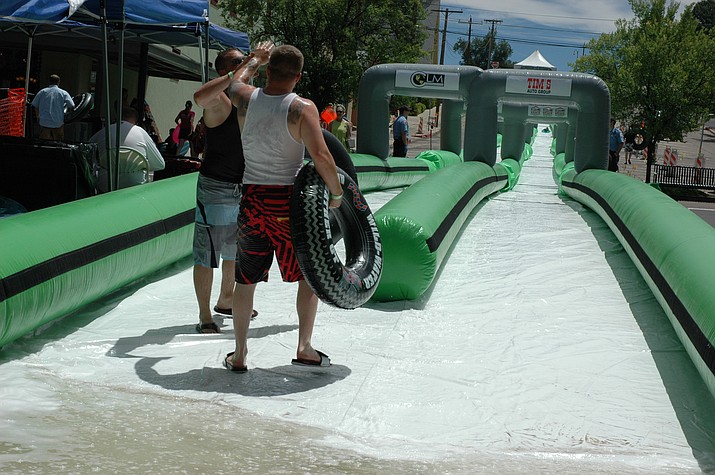 Two attendees of the Northern Arizona Monsoon Festival give each other a high five after finishing a run down the 735-foot inflatable water slide that highlighted the event.

Prescott residents just got a taste of what Flagstaff and Phoenix residents are well familiar of: sliding through the city on a water slide of epic proportions.

Going down the slide

Serving as the main attraction for the first annual Northern Arizona Monsoon Festival, a 735-foot inflatable water slide was set up on Union Street in downtown Prescott.

The slide dropped two-and-a-half city blocks into a pool of water on Cortez Street right at the foot of the Yavapai County Courthouse Plaza.

To complement the slide, 1,000 tons of sand was dumped nearby to form a massive sand bar. Food and drink vendors were present, as were bands providing live entertainment.

Some of the proceeds from alcohol sales were subsequently donated to the Boys & Girls Clubs of Central Arizona.

Flagstaff and Phoenix have been hosting similar events in recent years through an organization called Slide the City. This one, however, was of Steve Gottlieb’s design.

“We’ve never done this before, so we hired one of the best firms in the state to do it, Arizona Bounce Around,” said Gottlieb, who owns and manages Eagle Entertainment and Events.

Though he reserved the day months ago, he probably couldn’t have picked a better weekend to host the ambitious venture.

Arizona is currently experiencing near record heat for this time of the year.

Additionally, this is one of the few summer weekends in Prescott that a major event isn’t taking place on the Courthouse Plaza; therefore freeing up downtown parking and allowing festival attendees to dry off on the plaza’s grass without tents and booths taking up all of the available space.

Despite the extensive planning and community anticipation, the event started out a little slow with attendees only trickling in for the first two hours of sliding and there being some minor complications with getting the water slide fully operational.

“For some reason the heat made the plastic expand and it required a little more water than we thought,” Gottlieb said.

In other words, the water being applied was evaporating before it could reach the bottom of the massive attraction.

“It wasn’t too cool,” said Tyler Manibusan, 17, who signed up for the first two hours of sliding. “They were about an hour late to set everything up and they had to cut it short for a little bit to get more water on because people were stopping like half way. But they made up for it.”

To fix the issue, the organizers applied a liberal amount of dishwashing liquid and had the Prescott Fire Department temporarily open an additional fire hydrant valve to give the slide a proper coating.

Once resolved and the heat of the still summer day ramped up, attendance quickly swelled.

Good thing for Gottlieb too, for the event wasn’t cheap to produce.

As of the day of the event, he said he intends to do it in years to come.