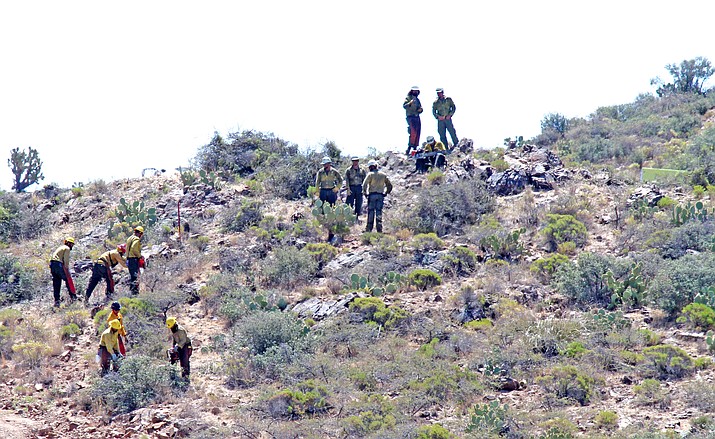 A crew from Nevada does “contingency line work” in the hills south of Yarnell, in the ongoing effort to create fire breaks. Officials say the fire-break work that was done prior to the start of the Tenderfoot Fire helped to give firefighters the “upper hand” in dealing with the wildfire.

YARNELL — More than $4 million has gone into fighting Yarnell’s Tenderfoot Fire to date, and the number is expected to grow slightly in the coming days, says the incident commander for the firefighting effort.

Although the fire was nearly contained by Friday morning, June 17, current Incident Commander RobRoy Williams said about 130 crew members still remained on site to douse remaining embers, and to watch the area.

RobRoy Williams, the current incident commander of the Tenderfoot Fire in Yarnell, provides an update to the media Friday morning, June 17, while other fire-fighting officials look on. Williams reported that the fire was 90 percent contained Friday, and was expected to be completely contained by Sunday, June 19.

“They’re doing hot-spotting and monitoring to make sure the containment lines that were put in will hold – especially with the high temperatures that are forecast through the weekend,” Williams said of the remaining crew members.

In addition, he said, crews were doing stabilization work to help minimize flooding from coming monsoons, as well as contingency line work to create additional fire breaks in the hills south of Yarnell.

While he did not expect the fire-containment cost to go up significantly, Williams said it would continue to rise slightly until the fire was completely contained.

The total includes only fire-containment efforts, and not property damage, Williams said. But, he pointed out, property damage was limited mostly to two minor buildings — a storage shed at a home on the east side of Highway 89, and a shed at a communications tower.

Although about 350 residents were evacuated during the fire, no homes were lost. Overall, the officials at the briefing said a number of factors gave firefighters an advantage in battling the Tenderfoot Fire.

Dolores Garcia, who works in fire mitigation and education for the Bureau of Land Management’s (BLM) Arizona office, said: “The key thing here is partnership and the efforts of multiple agencies, and showing the successes of that sweat equity that did give the firefighters of the Tenderfoot Fire the upper hand.”

That “upper hand” was achieved largely through fire-break work that had taken place in the years since the devastating Yarnell Hill Fire in June 2013.

Arizona State Forestry Public Affairs and Legislative Officer Bill Boyd pointed out that State Forestry administered a number of grants that had helped to create a fuel break, as well as removing slash and small trees, on the east side of Yarnell.

The Yarnell Fire District signed grant agreements in 2014 to carry out the projects.

Russell Shumate, Northwest District Manager for Arizona State Forestry, explained that the fire breaks allowed the crews to “make a stand” in their firefighting efforts.

Williams, who also served as incident commander for the initial attack, said the weather also played a part in the positive results. “On the 11th and 12th (of June), we had a little bit of a change in weather; it sprinkled. That was the turning point.”

By Thursday evening, June 16, the fire had consumed 4,087 acres, Williams said, and more than 20 agencies helped in fighting it.