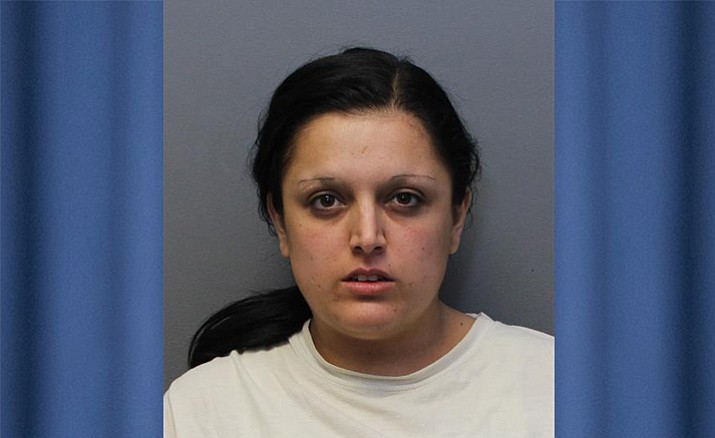 Deputies are looking for this woman in connection with a burglary and ID theft case,

The Yavapai County Sheriff’s Office got a break in a burglary/ID theft case thanks to an alert detective in Cottonwood.

On June 6, YCSO deputies were called to the Mormon’s Crossing Day Use parking lot in Cornville for two vehicle burglaries, according to a YCSO press release. Two adult female victims parked their respective vehicles and went to the creek. When they returned to the parking area, both realized their purses and wallets had been stolen. There were no signs of forced entry, but both women told deputies their vehicles had been locked.

One of the victims called her credit card company and learned the suspects already used her card twice at a gas station/convenience store in Sedona. A deputy visited the store and confirmed at least one purchase of beer and cigarettes with the stolen credit card, as well as a gas purchase.

The deputy obtained photographs of the two suspects from surveillance video and sent the information to area law enforcement agencies.

On June 13, a Cottonwood Police Department detective called YCSO detectives and provided information regarding the arrest of a woman who appeared to match one of the suspects in the surveillance photos. (The Cottonwood PD arrest was unrelated to the YCSO investigation.) The YCSO detective contacted 26-year-old Meissa Lomeli of Cottonwood and immediately identified her as one of the suspects, the release stated. A vehicle that Cottonwood police seized in their case also matched the description of the vehicle seen at the Sedona convenience store – a dark-colored SUV.

When questioned, Lomeli denied participating in the burglaries or being present and purchasing items at the Sedona gas station. After seeing photos of herself, she refused to discuss the case further or identify her accomplice. During additional follow-up, detectives found a receipt for an $1,100 bank check in Lomeli’s vehicle and discovered the check was stolen and cashed using the victim’s identity.

The YCSO detective additionally charged Lomeli with Burglary, Theft, Theft of a Credit Card, Fraudulent use of a Credit Card and Criminal impersonation. She remains in the Camp Verde Detention Center on a total bond of $12,500.

Detectives continue to seek the identity of the second suspect in this case. She is described a white female, blonde hair, 200-220lbs, and approximately 5-foot-6 to 5-foot-8 tall. If anyone has information further information regarding Lomeli or her accomplice, please call Detective Todd Swaim at 928-554-8605 or Yavapai Silent Witness at 800-932-3232. If the caller’s tip to Silent Witness leads to an arrest, a cash reward will be offered.

YCSO offers a crime prevention tip: When parking your vehicle at any trailhead parking area, REMOVE VALUABLES. There are suspects continually watching these areas knowing that vehicles will be left unattended for long periods of time. If you see something suspicious, please contact your local law enforcement agency.