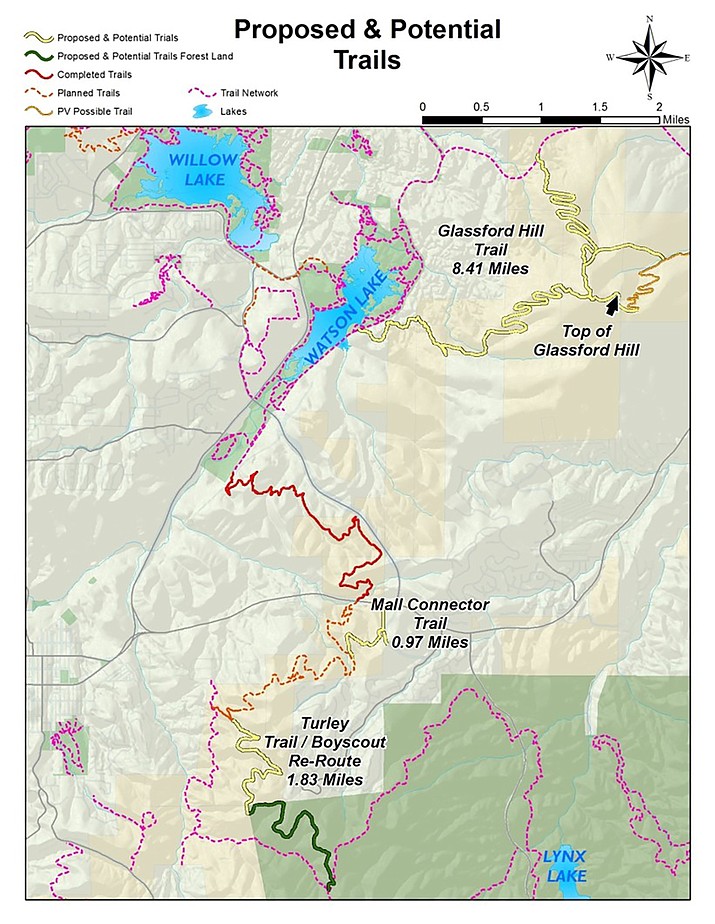 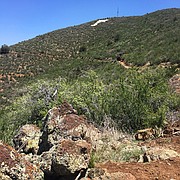 One of the projects the City of Prescott is considering, with the open space money, is construction of a one-mile section of trail that would connect the Prescott Gateway Mall (south of Panera Bread) to the existing Prescott Circle Trail, located off Highway 69 in the Badger “P” Mountain area.

PRESCOTT – Glassford Hill, the Turley Trail, and vacant land near the Prescott Gateway Mall could all have improved trail access soon – the first of multiple anticipated results of a move by the Prescott City Council this past week.

In a 6-1 vote, the council agreed Tuesday, June 7, to set aside $3.8 million for open space acquisitions. The money will come from the revenue raised through the city’s 1-percent streets and open space sales tax, which was approved by voters in 2000, and expired at the end of 2015.

The set-aside fund will be a part of the 2017 fiscal-year budget, which the council tentatively approved later in Tuesday’s meeting.

Several of the council members mentioned the need to complete Prescott’s trail system as a top reason for the fund.

After the meeting, Recreation Services Director Joe Baynes said the needed trail easements through Arizona State Land in the Glassford Hill, Turley Trail, and Gateway Mall areas would be the first expenditures to go to the council from the $3.8 million set-aside.

“I’ll be bringing those to the council in August,” Baynes said of the total of 6.3 miles of trail easements in the three locations.

The easements, which are expected to cost the city about $100,000, would allow for:

• Construction of 3.5-mile trail on Prescott’s side of Glassford Hill (to connect with the recently completed trail in Prescott Valley).

• Rerouting and improvement of the Turley Trail/Boy Scout Trail in south Prescott (1.8 miles of easement).

• Construction of a one-mile section of trail that would connect the Prescott Gateway Mall (south of Panera Bread) to the existing Prescott Circle Trail, located off Highway 69 in the Badger “P” Mountain area.

If the council approves the easement expenditures in August, Baynes said the trail construction could be under way within the next 18 months.

After that, Baynes said his department would be taking other open space/trails expenditures to the City Council “piece by piece,” as the details of the acquisitions are worked out with property owners.

While city officials have not been specific about all of the properties they are eyeing, Baynes released a map earlier this year that lists a number of areas as “potential trails of interest.”

Among those areas are: completion/improvement of the Prescott Circle Trail connections in northwest Prescott; a lake-to-lake trail (Willow to Watson lakes); preservation of the “iconic viewshed” in the Granite Dells area; and expansion of the Greenways Trails in central Prescott.

The lack of specificity came up at the June 7 council meeting, when Councilman Steve Blair maintained that the $3.8 million total was an “arbitrary figure,” adding, “I want to know where it came from.”

Councilwoman Jean Wilcox pointed out, however, that the council had earlier discussed the matter in executive session, and had talked about strategic acquisitions. (The Arizona Open Meeting Law allows the council to discuss pending property acquisitions in closed-door sessions.)

Councilwoman Billie Orr agreed, maintaining, “It wasn’t really arbitrary; it was based on some logical conclusions.”

And Mayor Harry Oberg said he had asked Baynes how much money would be required to complete the city’s trails system, and Baynes had responded that it could be accomplished with about $3 million. The city already had $700,000 set aside for open space, Oberg said, and the council opted to round the number up to $3.8 million to bring the city’s total open space acquisitions from the sales tax to $20 million.

(To date, the city has spent about $16.2 million of tax revenue on open space acquisitions. Prior to the 2000 vote, the city anticipated spending as much as $40.7 million on open space, with the remainder going toward street improvements.)

Councilman Greg Lazzell, who earlier expressed doubts about the creation of the $3.8 million open space fund, said he now was confident that Baynes would administer the money competently. Even so, he said his support in the future would be for trails, and not for tracts of open lands.

City officials have pointed out that the individual expenditures would still have to go to the council for approval. In addition, Budget and Finance Director Mark Woodfill said the current council or a future council could choose to change the commitment for the open space fund.

Ultimately, only Councilman Jim Lamerson voted against the resolution setting aside the open space fund.