The Apache Wars: The Hunt for GERONIMO, the APACHE KID, and the CAPTIVE BOY Who Started the Longest War in American History, by Paul Andrew Hutton 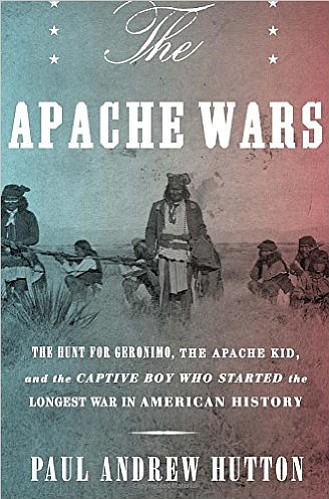 In this epic and monumental historical narrative, The Apache Wars, Paul Hutton unfolds over two decades of the last war for the West through the eyes of the men and women who lived it. This includes the soldiers Kit Carson, O. O. Howard, George Crook, and Nelson Miles; the scouts and frontiersmen Al Sieber, Tom Horn, Tom Jeffords, and Texas John Slaughter; the great Apache leaders Mangas Coloradas, Cochise, and Victorio; the great White Mountain scout Alchesay and the Apache female warrior Lozen — as well as the fierce Apache warrior Geronimo, the Apache Kid, and the kidnapped boy who became Mickey Free. These were the lives that “shaped the violent history of the deserts and mountains of the Southwestern borderlands — a bleak and unforgiving world where a people would make a final, bloody stand against an American war machine bent on their destruction.”

Paul L. Hedren’s Powder River: Disastrous Opening of the Great Sioux War, by University of Oklahoma Press recounts the wintertime Big Horn Expedition and its singular great battle, along with the stories of the Northern Cheyennes and their elusive leader Old Bear. Historian Paul Hedren tracks both sides of the conflict through a rich array of primary source material, including the transcripts of Reynolds’ court-martial and Indian recollections. The disarray and incompetence of the war’s beginnings, officers who failed to take proper positions, disregard of orders to save provisions, failure to cooperate, and abandonment of the dead and a wounded soldier in many ways anticipated the catastrophe that later occurred at the Little Big Horn. Forty photographs, many previously unpublished, and five new maps detail the action from start to ignominious conclusion.

Robert M. Utley’s history, Geronimo, by Yale Press won six awards, including the Spur and the Wrangler awards, and it is no wonder. His meticulous research digs beneath common perceptions to reveal a complex character: a spiritual warrior, who converted to Christianity before he died; a man with a deep and abiding hatred of Mexicans rather than Americans; and a man with a “record of brutality that matched any of his comrades.” Thrown into prominence by historical circumstances, Geronimo was a man capable of remarkable changes as the 23 years of his time as prisoner of war went on.

Bob Boze Bell of True West Magazine fame, in The Illustrated Life & Times of Billy the Kid, ably presents the Billy years, starting with his birth on November 23, 1859, in New York City (though the place and time have been much disputed) to his death at the hands of Sheriff Pat Garrett on July 14, 1881, in Fort Sumner, New Mexico Territory. As in Bell’s books on Doc Holliday and Wyatt Earp, he injects just the right amount of humor. On page 189, for example, Bell shows 21 “likenesses” of the young desperado, including “Goofy Billy,” “Alfred E. Billy,” “Degas Billy,” “Beatle Billy” and “O.J. Billy.” Yes, it must be said that the “illustrated life” of Billy the Kid is the star of this wonderfully captivating book.

A more scholarly but no less compelling book on Billy the Kid is Robert Utley’s Wanted: The Outlaw Lives of the Kid and Ned Kelly. This is a two (character)-for-the-price of one insightful and well-researched portrait of first Billy, then Ned, where Utley makes fascinating comparisons of their lives and legacies. Bush-raised Ned Kelly is as much a part of Australian myth and legacy as Billy the Kid is here in the United States, yet Utley uncovers profound differences despite their parallel courses, appeal, and shared fates.

In a recent interview, author Paul Hutton explains that “While there is a considerable amount of Apache culture in there, it’s not a cultural study of the Apaches. It’s a narrative; it’s a story. I was trying to move beyond my academic world and write a compelling story with great characters who would appeal to a very broad audience.” And, indeed, he succeeds brilliantly. Despite the enormous scholarly foundation (74 pages of biographical notes), I could not put down this harrowing account of Western history.

Hutton succeeds also in his goal to treat both sides fairly and with dignity, though, he says in the same interview, “America really was just horrible to the Indians” or as put by San Carlos Indian Agent, John Clum, “our noble white Government had bought the Apaches’ land and their homes, but had not told the Apaches anything about it.” And there were not just two sides to the story; the French, the Mexicans, the Confederates, as well as our government and many Apache bands were all playing their part.