Romero of Yavapai College selected by Phillies in MLB Draft 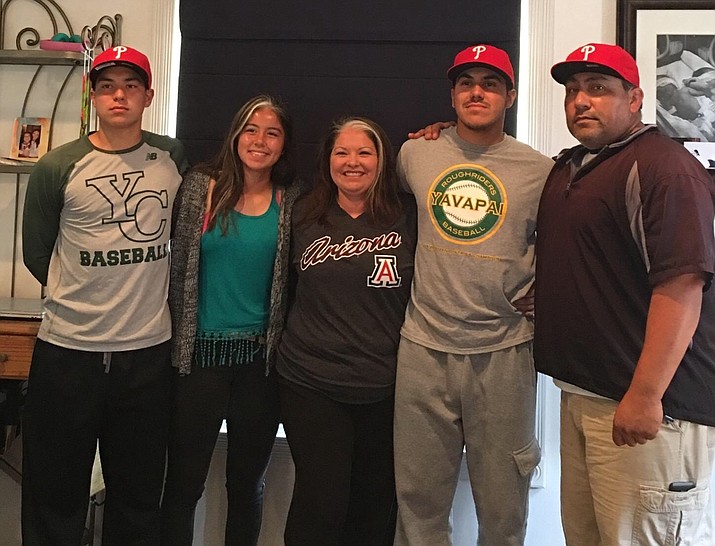 Yavapai College left-handed pitcher JoJo Romero, second from right, stands with family at his home in Oxnard, California, after being selected by the Philadelphia Phillies with the 107th pick in the 2016 MLB Amateur Draft on Friday, June 10. From left to right: Romero's brother Joshua, his sister Sirena, his mom Elena and his father Abel. (Photo Courtesy of JoJo Romero)

Possessing a lightning-rod for a left arm with a low-90s fastball and devastating changeup certainly helps one’s draft stock.

And striking out 15 batters in a complete game win to lead your team to its first national title in 23 years during junior college baseball’s biggest stage doesn’t hurt, either.

With that selection, Romero becomes the highest draft pick to come out of Roughrider Park in 30 years.

Former Yavapai alum Curt Schilling, a six-time All-Star and three-time World Series champion, was drafted by the Boston Red Sox with the 39th overall pick in the second round of the 1986 draft.

Last summer, Yavapai standout Willie Calhoun was taken with the 132nd pick in the fourth round by the Los Angeles Dodgers.

The 5-foot-11, 190-pound native of Oxnard, California, wrote on his Twitter page after being selected that “no words can describe the feeling of hearing your name called.”

After he had time to process his selection, which could earn him up to $557,600 in signing bonus cash, Romero said being drafted is an “amazing feeling.”

“I am blessed to have been given this opportunity by the Phillies organization,” Romero said surrounded by family and friends at his home in Oxnard. “It’s been a crazy ride with and this whole year has been a blessing at Yavapai.”

He was a perfect 3-0 in Grand Junction, Colorado, last week to help the Roughriders claim the program’s fourth national title, and first since 1993.

Romero, who also has a scholarship offer to play baseball for the University of Arizona, said he will sit down with those around him and “make the best decision for me.”

WHAT'S NEXT FOR ROMERO?

Log online to dcourier.com for updates on this story and to find out what's next for JoJo Romero and the Philadelphia Phillies.