‘You get thinking about three years ago. That comes to mind.’ Emergency shelter continues at college 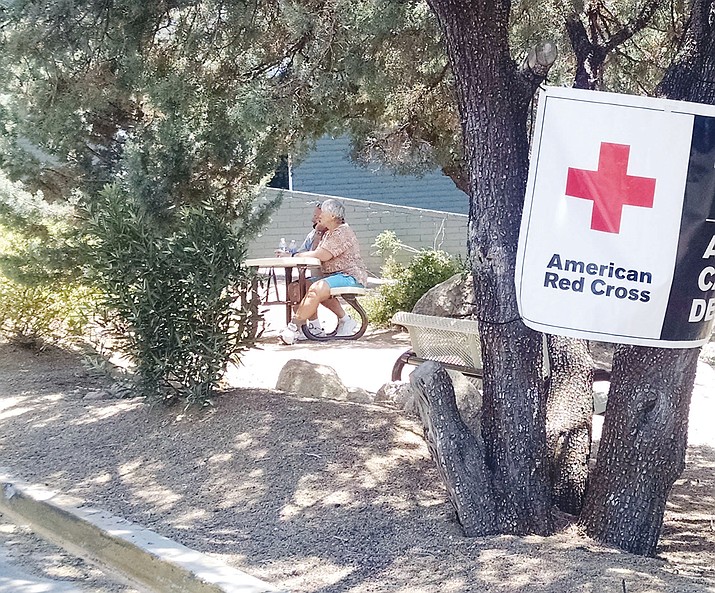 Dana and Janet Howe, 20-year residents of Yarnell, sit outside the Red Cross shelter at Yavapai College - hoping their home is still standing.

How long that will be remains unknown, as the Tenderfoot Fire grew to about 1,300 acres on Thursday and Arizona Public Service was still working to fully restore electrical service to customers.

Given the lower-than-expected response, the shelter, originally set up in the Yavapai College gymnasium, moved Thursday to a smaller space in another building.

“It’s actually kind of convenient, because the cafeteria is here and we’ve got a rec room that works for our people to relax,” Rodriguez said.

Dana and Janet Howe spent Wednesday night at the shelter, and said they’ll wait until they get the OK to head home. Their home survived the 2013 Yarnell Hill Fire, and they hope it’ll still be there when they’re are allowed to return.

The 20-year Yarnell residents said they went to their friends’ home in Peeples Valley after the fire started Wednesday afternoon.

“You get thinking about three years ago. That comes to mind,” Dana Howe said.

With power out across southwest Yavapai County, they decided it would be safer to leave the area. They had hoped to stay at a cousin’s home in Wickenburg. But their relatives are out of town, so the Howes decided to stay at the American Red Cross shelter at Yavapai College.

The shelter had expected up to 200 evacuees Wednesday night, and had beds for 85. But many never showed up – officials suggested they may have stayed with friends and family, or found other arrangements.

“They have done a real good job,” Dana Howe said. “Gosh, they come over every hour or so to see if there was something that we needed.”

While the American Red Cross is the lead agency at the shelter, it’s supported by the Yavapai County Voluntary Organizations Active in Disaster – a coalition of organizations that includes the Red Cross, Salvation Army, nurses, ham radio operators, Community Emergency Response Teams, Animal Disaster Services and the United Way.

“They don’t make you feel like it’s an obligation for them to take care of you,” Janet Howe said. “That’s important because you’re feeling really vulnerable as it is.”

Animal Disaster Services provided shelter for evacuees’ cats and dogs in another location on campus, and large animals boarded at the Prescott Rodeo Grounds.

Representatives of the American Red Cross said they have adequate supplies to help displaced residents. Similarly, Animal Disaster Services already received more than enough donated supplies. Both organizations stated rather than bringing items to the shelter, community members who wish to help can donate to any of the Yavapai County Voluntary Organizations Active in Disaster coalition members.