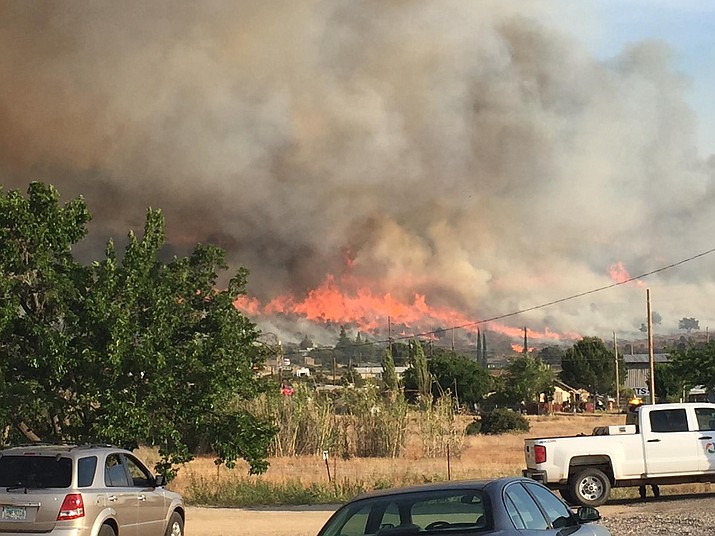 Incident Commander in cooperation with Yavapai County Sheriff has issued mandatory evacuation notices to the Peeples Valley on the east side of Highway 89. This was a precautionary evacuation and there is no eminent threat at this time.

Authorities also expanded warning to residence on the west side of Highway 89.

Fire behavior has increased this afternoon as a result of an increase in winds and decrease.

Firefighters were able to successfully utilize existing fuel breaks in combination with aviation resources, fire engines and crews creating handline and black line/burn outs to make some significant progress protecting homes. Type 2 Incident Management Team has been ordered and will in-brief at 5 p.m.

An emergency shelter under the direction of the American Red cross remains at Yavapai College at 1100 E. Sheldon, Prescott, for residents and small animals. Large animals can be taken to the Prescott Rodeo Grounds at 840 Rodeo Drive, Prescott.

No entry, no escorts allowed in Yarnell

Incident Command post for the Tenderfoot Fire in Yarnell states that both north and south access on Highway 89 into Yarnell remains closed. Resident escorts into town have been suspended until further notice. Necessary emergency personnel are the only people allowed into town.

The U.S. Department of Homeland Security’s Federal Emergency Management Agency has authorized the use of federal funds to assist the Arizona Department of Forestry and Fire Management combat the Tenderfoot Fire.

Yavapai County Sheriff's Office spokesman Dwight D'Evelyn said the evacuation area was extended to Peeples Valley on the east side of Highway 89.

From the Yavapai County Sheriff's Office: Per the Fire Incident Command, Highway 89 into Yarnell for both north and south sides, will remain CLOSED.

Also, resident-only escorts into town have been SUSPENDED until further notice.

Again all entry into town, except for necessary emergency personnel, will be denied at this time.

Please consider the Red Cross shelter at Yavapai College in Prescott as a temporary housing option.

The Tenderfoot Fire is now estimated to have burned 1,237 acres, up from 700 this morning, due to "better mapping," the BLM said.

A Type-2 incident management team has been ordered and there are now about 240 people working this fire.

"Per the Incident Commander, Highway 89 into Yarnell will remained closed at least until early evening today. This order, of course, is subject to change depending on fire containment and other safety concerns within the town. We appreciate everyone’s patience as the hard working fire crews continue their efforts to protect Yarnell."

"Remaining evacuees will relocate today to another on-campus facility.

"The YC switchboard is receiving calls from the public, mostly from residents who want to volunteer. The Red Cross is politely declining due to sufficient staffing. Individuals who wish to donate to victims of the Tenderfoot Fire are encouraged to do so through the American Red Cross home page: redcross.org

"The remaining evacuees are being moved to 3-119."

BLM spokesman Mike Reichling said the incident commander is taking an aerial look at the fire and he believes the containment percentage may be revised upwards by mid-day.

"The weather is cooperating," he said. "The winds are picking up a little bit, but they're blowing in our favor so far."

There are about 200 people working the fire.

Reichling said there are two investigators looking into the cause of the fire, but they don't have a determination yet.

YARNELL -- The "Tenderfoot Fire," which started about 3 p.m. Wednesday, June 8, is, as of Thursday morning, about 10 percent contained and the evacuation order could be lifted this morning.

The Yavapai County Sheriff's Office, which is responsible for overseeing evacuations, is waiting the "green light" from the fire's incident commander to allow people back into their homes, spokesman Dwight D'Evelyn said.

APS reports that 467 customers remain without power, with no estimate for return of service.

The cause of the fire is still under investigation, according to the Bureau of Land Management.

Check this page for updates as they become available.