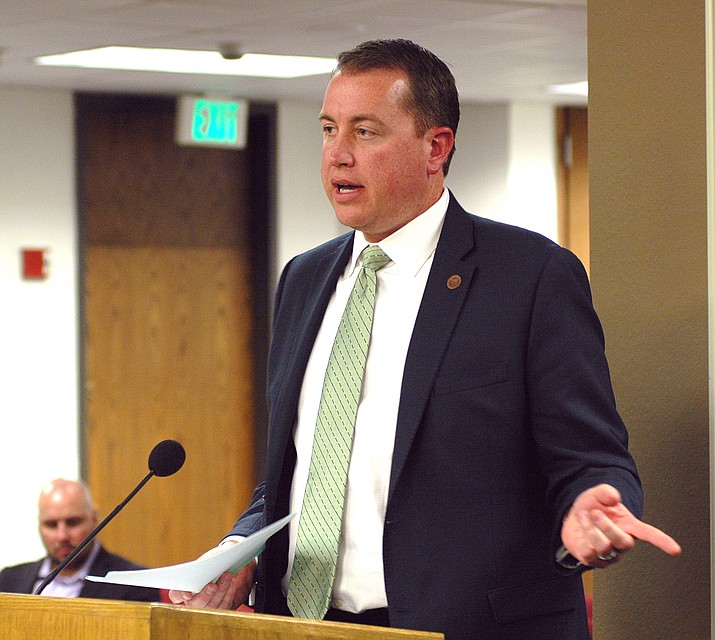 In an informal opinion Wednesday, state Solicitor General John Lopez sidestepped questions about its legality posed by Treasurer Jeff DeWit in the wake of voter approval last month of the measure. It will provide $3.5 billion to schools over the next decade, including $2.2 billion in extra withdrawals from the state’s education trust account.

DeWit said he and other members of the state Board of Investment had questions about whether taking the additional dollars is legal and wanted answers before releasing any money.

Lopez did not say DeWit and others are wrong to raise those questions. But Lopez, writing on behalf of Attorney General Mark Brnovich, pointed out there already is a case in federal court challenging the ability of the state to increase withdrawals from the education trust account to boost school funding.

“This office typically does not issue formal opinions regarding matters that are the subject of pending or impending litigation,” Lopez wrote. “Consistent with that practice, we decline to do so here.”

Lopez did agree, however, to tell DeWit and other board members that they face no personal liability for distributing the cash as voters mandated, even if a judge subsequently finds the measure illegal.

“Arizona’s public officials have a duty to obey laws unless a court enjoins a law or declares it unconstitutional,” Lopez said.

Based on Wednesday’s opinion, such as it is, DeWit told Capitol Media Services he will call for a meeting of the five-member investment board on June 28 and ask for a vote to release the first $260 million to schools. But DeWit, who for months has publicly expressed doubts with the ballot measure’s legality, declined to say how he will vote.

“Certainly, some conversation and reflection need to take place on my end, as well as for every board member, I would assume,” he said.

It’s virtually guaranteed there will be at least two votes for the transfer as two of the board members, the heads of the state departments of administration and financial institution, are appointees of Gov. Doug Ducey, the prime drum-beater for the ballot measure. Aside from DeWit, the other members are Pima County Treasurer Beth Ford and financial adviser Harry Papp.

While Lopez would not opine on the legality of Proposition 123, he did say that, absent a court ruling to the contrary, charter schools are eligible for a share of additional dollars the voter-approved measure will generate.

The informal opinion comes the same day that U.S. District Court Judge Neil Wake gave permission for Michael Pierce to amend his lawsuit challenging the voter-approved measure. Pierce argues that simply amending the Arizona Constitution to boost trust fund withdrawals is legally insufficient. He contends that can happen only with congressional approval.

That is one of the same questions that DeWit and the board asked Attorney General Mark Brnovich to answer. Wednesday’s decision by the AG’s office not to wade into that question leaves it unanswered.

Plans are to start distributing the first $260 million by June 30 unless blocked by a court order. As of late Wednesday no date has been set for a hearing in that case.

Central to both the lawsuit and DeWit’s request goes to the nature of the trust.

The federal government gave Arizona 10 million acres when it became a state in 1912 with the restriction that it be held for the benefit of certain beneficiaries, mostly public schools. About 9.2 million acres remain.

There also is about $4.8 billion in the trust made up of the proceeds from sales and leases of the land.

Under current law, public schools get 2.5 percent of the value of the trust annually, a figure designed to ensure level distributions without endangering the principal. Proposition 123 boosts that to 6.9 percent for the next decade.

Legislative budget staffers said that, at current withdrawals, the fund would grow to about $9 billion by 2025. But with the additional funds taken out, the account is projected to be $6.2 billion instead.

What makes that significant is the contention by both DeWit and Pierce that such a radical change can be made only by amending the “Enabling Act,” the 1912 law that gave Arizona the land in the first place. Lopez, acting on behalf of Brnovich, won’t answer that question.

The questions about the eligibility of charter schools to share in the proceeds also stem from the Enabling Act.

DeWit said that in giving Arizona the federal lands, Congress required that the schools they support “shall forever remain under the exclusive control” of the state. But charter schools, while technically public schools, can be owned and operated as private, for-profit companies.

Lopez, however, said there is nothing new in Proposition 123 that suggests the charter schools are ineligible for the additional money.

“Charter schools have received monies from these trust funds for 21 years,” he pointed out, ever since the legislature allowed their creation. “Proposition 123 does not compel the board to overturn more than two decades of pattern and practice in this area due to the nature of the beneficiary.”

DeWit stressed on Wednesday he wasn’t engaging in an attack on charter schools but that the issue arose when he hired an outside lawyer last year to look at all the legal issues surrounding the ballot measure. In fact, he said, the language about “exclusive control” of the state was “a shock to us,” especially since charters have shared in state revenues for so long.