Prescott Police Chief search down to 2 from Arizona 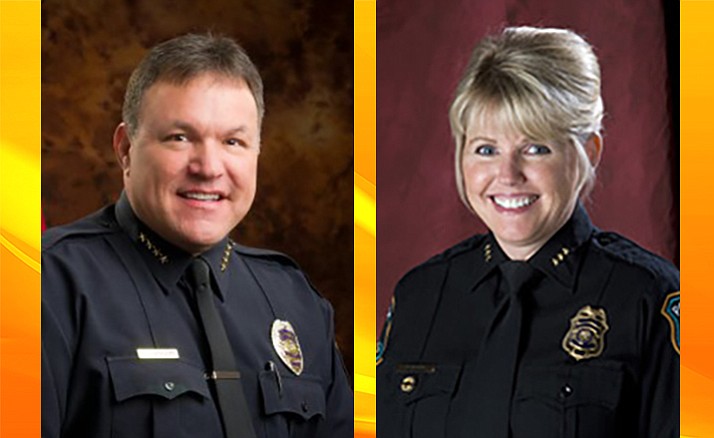 Derek Arnson and Deborah Black are the finalists for Prescott Police Chief. They have been invited for onsite interviews June 14.

PRESCOTT – The City of Prescott will conduct onsite interviews of two candidates for Police Chief on Tuesday, June 14.

The city recently invited three candidates for onsite interviews for the position being vacated this month by Police Chief Jerald Monahan, according to a June 7 news release. Two applicants from Arizona accepted the invitation, while one out-of-state applicant declined.

The first round of interviews was electronically conducted via Skype, after which the top five candidates were narrowed down to three. The position generated 31 applications during a national search conducted from April 15 to May 16.

The two candidates scheduled for onsite interviews on June 14, are Deborah Black and Derek Arnson. Pending results of these interviews, the city may extend a contingent offer of employment.

Chief Deborah Black has more than 35 years of professional law enforcement experience with two Arizona police agencies. She has served in Glendale for 9.5 years, in the capacity of Assistant Chief, and as Police Chief for the past four years.

Previously she spent 25 years with the Phoenix Police Department where she worked as new recruit, Sergeant, Lieutenant, Commander and Assistant Chief.

Chief Derek Arnson has more than 24 years of law enforcement experience, serving the past five years as Police Chief in Nogales, Arizona.