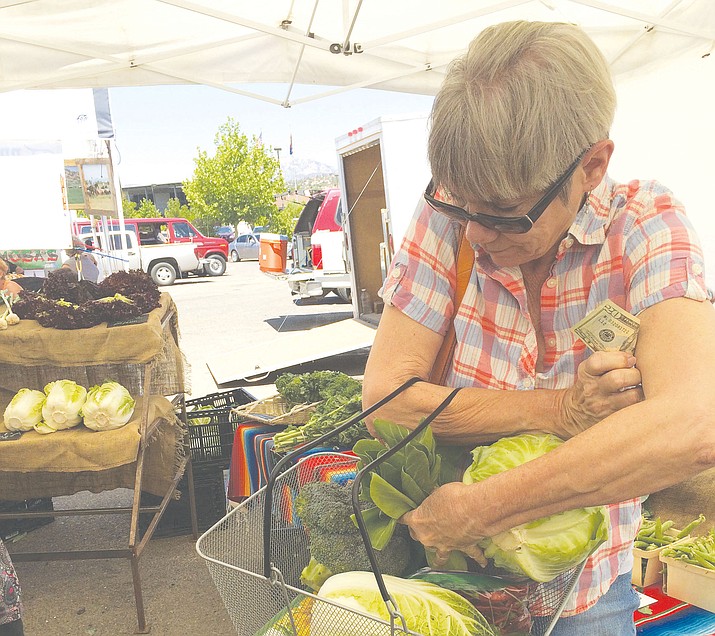 Holly Reilly of Chino Valley picks up a basket full of fresh vegetables grown at the Whipstone Farm in Paulden.

PRESCOTT – Summer smells of fresh flowers, homegrown coffee beans and out-of-the-oven hot bread and pastries were quite the draw for hundreds of locals who filled baskets, and stomachs, with some of the fare offered at the Prescott Farmers Market on Saturday on the Yavapai College grounds.

Sipping a coffee from locally grown beans under the shaded hut of one of the produce booths, Kate Wilkinson and her daughters, Soleil, 7, and two-month-old Luna, savored the friendly hubbub of the market. The Wilkinson family came to buy some locally produced vegetables, but clearly appreciated just the chance to soak up some sunshine on a Saturday morning. And Soleil was treated to a pink and yellow balloon animal at the booth that also offered face painting for children.

At the Whipstone Farm booth, Holly Reilly of Chino Valley filled her basket to the top with “fresh, organic vegetables,” including dried chiles. She said she comes most Saturdays, “especially during chili roasting time.”

A number of folks stocked up on their weekly supply of vegetables and then returned to one of several tamale booths for either breakfast or lunch. On the far side of the market that opens at 7:30 a.m. and closes at noon, were a few tables under an umbrella where people could dine and be serenaded by Chino Valley guitarist and vocalist Christian Michael Berry.

“It’s just great. Everything here is so fresh,” declared Anne Drutz, who with her husband, Jan, came for what has become their Saturday routine.

“The people are just so friendly,” Jan said.

Market manager Kelley Villa said the market has been now open a month and every week they feature various farms, crafters and enjoy the talents of guest musicians.

Beyond supporting farms in Yavapai County, as well as others from around the state, the market requires its food vendors – tamales, quiches, coffee and baked goods – to guarantee that at least 10 percent of the ingredients are harvested in Arizona, Villa said. Craft vendors must guarantee that 80 percent of their products come from Arizona, she said.

For farmer Cody Rade of Whipstone Farms, this Farmers Market has become a tradition. He said he was one of the very first farmers to sell produce at the market when it first opened in 1997.

On this particular Saturday, Rade was selling a variety of herbs, root crops – he had an impressive array of oversized radishes – dried chiles, peas and cabbages. He, too, was selling bundled bouquets of flamboyant and fragrant floral arrangements.

“We’re feeding our friends,” Rade said of the multitudes of return customers he knows by name. “It’s awesome.”