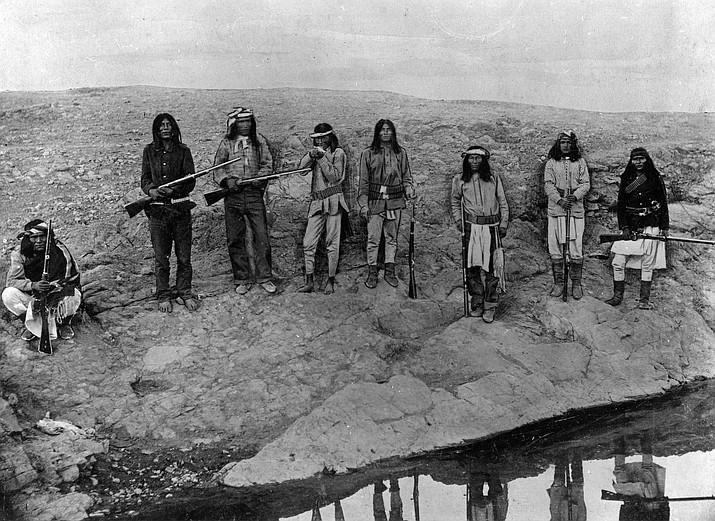 In the 1870s and 1880s, Apache warriors enlisted in the United States Army to serve as scouts while the Army was at war with the Apache people. Why would Apache warriors do something that appears contrary to the interests of their own people? What was the role of Apache scouts? Could Army commanders trust Apache scouts? Was the use of Apache scouts effective? The answers to these questions are probably as varied as the individual scouts and their personal relationships with the Army. In broad terms, this article will provide some answers. 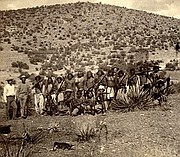 Lieutenant Rucker and one of the scout companies, about 1878. call number MIL-200P

As the Nation’s attention turned west after the Civil War, the Army’s principal mission in western territories was to protect settlers and settlements from attacks and depredations by Natives. This was not easy anywhere; in Arizona it was particularly difficult. The Apache had a huge advantage over the Army. They knew the land and its resources better than the Army ever could. Small raiding parties could strike quickly, steal horses, cattle, food and anything else of value and seemingly vanish into nearby mountains. The Army might pursue, but generally to no avail. Apaches employed guerrilla tactics the Army had rarely seen, and the Apaches would confront the Army directly only if they had a numerical or tactical advantage; otherwise the Army couldn’t find them. We “moved like the wind,” said Geronimo. It became apparent that it would take an Apache to catch an Apache. 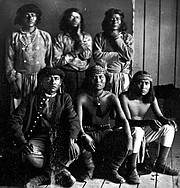 In 1866 Congress authorized the Army to enlist Indians as scouts. The enlistees held Army rank and were paid the same as regular cavalry soldiers. Major John Green, in command of Camp Grant, began the use of Apache scouts in 1869. In 1871, General George Crook took over the Military Department of Arizona and expanded the practice which he had found useful in his previous command in the Pacific Northwest. The scouts served under Army officers, but were often led by a civilian who had some knowledge of the area and its Natives, such as Al Sieber, General Crook’s best known Chief of Scouts.

The role of the scouts was reconnaissance and intelligence -- to find “the enemy.” This required familiarity with the land; the ability to recognize the most subtle signs of Native activity; the skill to track Natives; and the ability to lead troops stealthily into position for attack. It was “no holiday,” wrote Lt. John Bourke, for the regular soldiers to keep up with the Apache scouts when they were on the move.

When engaging hostile Apaches, Army scouts were part of the attacking force. Mostly, the scouts did not see this as turning on their own people. Apache culture was built on various sub-tribal groups, bands, clans and families. An Apache’s personal identity and loyalty were tied to his family and clan, rather than to an “Apache Tribe.” Even though there was a common language and culture among the Apache people, families, clans and other sub-tribal groups didn’t necessarily have any affinity for each other.

A warrior’s obligation to his family provides one reason for being an Army scout. The pay a scout earned could support his family. Also, as it became obvious that the Apache way of life was going to change, some hoped to reach a beneficial accommodation with the Army. If they were to be restricted to a reservation, cooperating with the Army might lead to more satisfactory terms. This was often a false hope as treaty after treaty, promise after promise, were broken.

Another reason to become a scout was that Apaches of the late 19th Century were bred to a warrior culture. Given a choice between fighting or settling into a sedentary life on a reservation, warriors chose to remain warriors -- even if it meant being Army scouts. One historian noted that these men “regarded war as their proper occupation and horses and weapons as the attributes of manhood.” Supporting their families and maintaining their dignity as warriors overrode any sense of kinship they might have had with hostile Apaches.

As warriors with exceptional skill, the Apache scouts were highly effective. General Crook credited the surrender of the Chiricahua Apaches in 1883 and the ultimate surrender of Geronimo and his last band of holdouts in 1886 to the work of his scouts.

There was one black mark on the record of the scouts. The story is too long to be fully detailed here, and some facts (e.g., who started a firefight) are in dispute, but in 1881 at Cibeque Creek some scouts turned against the Army. Army commanders knew that they were sending their scouts against their own kin, which was a serious problem. But the Army proceeded anyway due to the perceived urgency of the situation. Some scouts joined the fight on the side of their kinsmen; eight soldiers were killed. Three Apache scouts were subsequently executed for their role in the “Cibeque Mutiny.”

Overall, though, the Apache scouts served faithfully and valiantly. Eleven were awarded the Medal of Honor for their service. Sadly, when the Government determined to send the Apache into exile on a reservation in Florida, many of the faithful scouts were loaded onto a train and forced to go east to live with the people they had helped defeat.

Next week “Days Past” will discuss Apache Medal of Honor winners.

“Days Past” is a collaborative project of the Sharlot Hall Museum and the Prescott Corral of Westerners International (www.prescottcorral.org). This and other Days Past articles are also available at www.sharlot.org/library-archives/days-past. The public is encouraged to submit proposed articles to dayspastshmcourier@gmail.com. Please contact SHM Library & Archives reference desk at 928-445-3122 ext. 14, or via email at dayspastshmcourier@gmail.com for information.