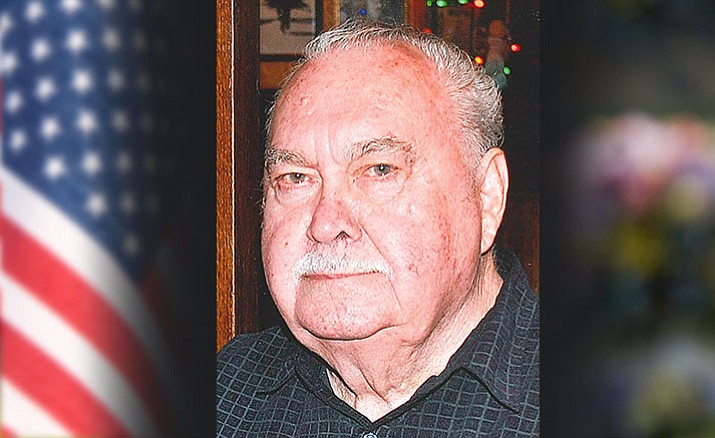 Louis Timar, 84 from Prescott Valley, Arizona passed away July 20, 2016 with his family at his side. Preceded in death by his Mother and Father, Mary and Louis Timar Sr.; brother Jim Timar; and wife of 57 years Jessie Timar. On August 16, 2016 they will celebrate 62 years together in heaven.

Louis is survived by his daughter Noeline Everett, husband Ted and in their words the best dog ever, Presley, of Prescott Valley; son Michael Timar; and his pride and joy in life, his Grandson, Carson Timar of San Diego. He leaves behind a brother Milt Timar and two sisters, Betty Carlock and Jane Streeter and their families

Born in Buffalo, Wyoming and raised on a ranch just outside of Buffalo, it was a pretty rough childhood. At the age of 16, Lou and a friend decided they wanted to see the world and forged each other’s signatures on the enlistment papers and they were in the U.S. Navy, and off to see the world. He was a sonar man and later became the crew’s favorite baker during the Korean War.

Lou returned to Buffalo and married Jessie Murray. They became proud parents of two kids. In 1958 they moved to Englewood, Colorado. In 1964 the family moved to Garden Grove, California where they spent 34 years raising their family. Lou became a true Mickey Mouse Mechanic working on the rides at Disneyland in Anaheim, California. This provided an incredible playground to raise the kids where they enjoyed the park and great entertainment with their Mom nearly every day during the summers for many years.

He received industry acclaim for his development and installation of the first ever suspended printing press for the Informa Newspaper in Mexico City. This was the first fully suspended newspaper press that was suspended to allow the press to move and avoid damage during their many earthquakes they have each year. It is still in use and has been duplicated many times around the world.

Lou and Jessie retired and built their beautiful dream home in Prescott Valley in 1999. In the last few years, Lou has enjoyed watching sports and shooting the breeze with his friends at Tony’s Place. Lou mostly enjoyed spending time with family and friends especially his beloved Grandson Carson.

Services and burial will be in Buffalo, Wyoming on Tuesday, July 26, 2016